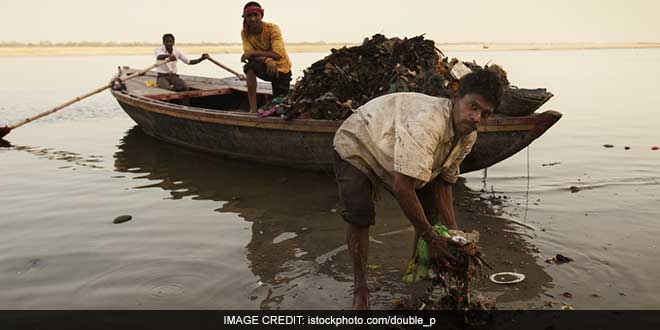 New Delhi: In another move to protect the human entity – Ganga, the National Green Tribunal (NGT) inspected 13 industries located along Ganga channel and directed them to shut down on Wednesday. The move came in after a high level committee inspected these 13 industries dealing with products like chemicals and power plants.  The green court headed by NGT Chairperson Justice Swatanter Kumar gave directions after examining industries along the Gajrola and Babrala drain with source from Bagad River in the Upper Ganga region in Uttar Pradesh. The drains further meet the Ganga.

“These industries were the primary source of pollution of Bagad drain, which was found dry at places and contained very high pollutants at certain stretches,” the bench said.

Drains are man-made channels or available naturally to carry storm water to its disposal point – the Ganga.

The committee report pointed out that the industries used fresh water for dilution, were dumping their effluents outside without treating a major part, and thus causing huge environmental and groundwater pollution.

The tribunal pointed out that the management and proper mechanism of handling the fly ash in the power plant was found missing.

All the 13 industries shall be shut down (till the next order)… Uttar Pradesh Pollution Control Board, state government and police shall ensure that water and electricity supply is disconnected, the bench said.

A complete report must be filed before the tribunal and provided to all the industries, it directed.

These industries had been given two weeks to file objections to the order.

Industries could submit action plan to become non-polluting, keeping in view the deficiencies noticed by the committee, the bench said.

The Central Pollution Control Board (CPCB) in a 2013 report asserted that Ganga river has a total of 138 drains that carry a discharge of 6,087 million litres per day in it.