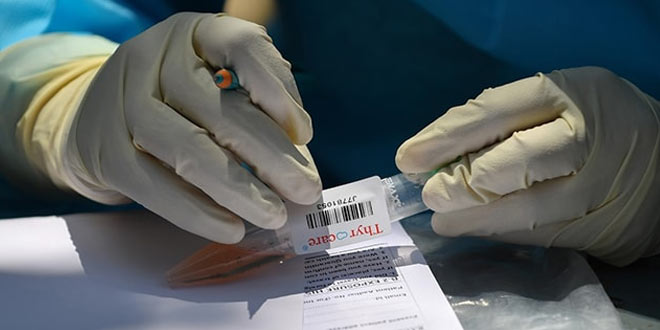 New Delhi: Variation in a genetic mutation among Indians may be the main reason behind the difference in the death rates due to COVID-19 across various states of the country, says a study that could inform new policies for controlling the novel coronavirus pandemic. An international team, led by researchers at Banaras Hindu University (BHU) in Uttar Pradesh, analysed mutations in the gene responsible for the expression of the Angiotensin Converting Enzyme 2 (ACE2), a protein on the surface of cells which is believed to act as a gateway for the novel coronavirus into the human body. Recent studies have effectively demonstrated that the ACE2 is encoded by a gene located on the X chromosome. In the journal Frontiers in Genetics, the researchers looked at the frequency of this mutation described as rs2285666 haplotype among various states of India.

Their spatial analysis showed that in India, frequency of this haplotype, or a combination of mutations, varied between 33-100 per cent across different regions. The researchers, for the first time, also ascertained a significant positive correlation for the mutation with the lower infection and case-fatality ratio (CFR) among Indian populations. Gyaneshwer Chaubey, Professor at the Department of Zoology, BHU said the variations identified reduce the susceptibility of a person against the novel coronavirus.

“If in a region more people with this haplotype will be present, the infectiousness of the virus would likely be lesser,” Mr. Chaubey, who led the study, told PTI. For example, he noted that statewise Maharashtra and Gujarat have the lowest frequency of the gene mutation of about 30-40 per cent while the Northeastern region with a 75-100 per cent mutation in the gene has the highest frequency.

People in Western India are more susceptible to the disease than those in Central India or East India or South India or Northeast India, Mr. Chaubey added.

The study adds important potential implications to understanding the transmission patterns of SARS-CoV-2 in various world populations, said Anshika Srivastava from BHU, who was also a part of the research team. The researchers noted that as far as policies to control the pandemic are concerned, the study suggests a single rule may not be effective in all the states. They also observed that in India as well as in Bangladesh, the tribal populations have a higher frequency of this haplotype than the caste populations.

Since the beginning, it has been hypothesised, and later observed that coronavirus is affecting people differently. In their previous research, published in the journal PLOS ONE, the team analysed the whole genome data of the ACE2 gene from various world populations, focusing on South Asia. They found that Indians were more closer to East and Southeast Asians, whereas from the ancestry point of view, Indians usually remained closer to Europeans than East and Southeast Asians.

This unexpected information helped us to explore more about the mutations and haplotypes present among Indians. We found out that the rs2285666 associated haplotype increases the ACE2 expression. In other words this mutation reduces the susceptibility against coronavirus, said Mr. Chaubey.

Noting that the mutation among Indians is 60 per cent and 20 per cent in Europeans, Mr. Chaubey said this implies that the Indians are less susceptible to COVID-19 than Europeans and Americans.

Surprisingly, we found out that the geographic distribution of this haplotype was highly correlated with the number of cases as well as CFR (death rate). Where the frequency of this genetic factor was high, the cases and CFR were less and vice versa, Mr. Chaubey noted.

Although data have been accumulating, the expression of ACE2 gene variation affecting host susceptibility among the various world populations is not yet known.

Genetically, most South Asians are more related with West Eurasian populations rather than with East Eurasians, whereas for this gene the result is contradictory, Professor George van Driem of University of Bern in Switzerland, a co-author on the previous study, added.

The researchers said there are a few studies on the ACE2 gene by other groups, but all of them have looked at the frequency differences of various mutations, whereas the team has used more powerful haplotype based analysis.

First 1,000 Days Of Life: Importance Of Maternal And Child Nutrition During Pregnancy And Up To Two Years Of Age

Unlock 5: Cinemas Permitted To Open From October 15; States Can Allow Gathering Of Over 100 People