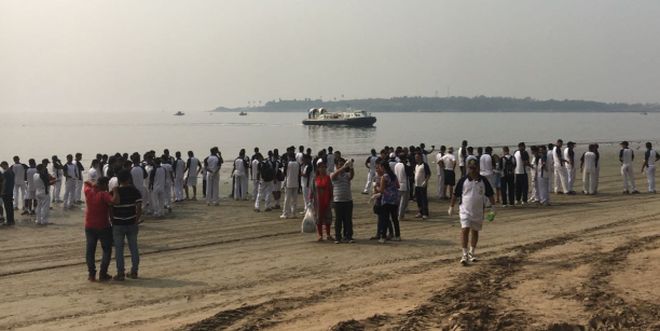 New Delhi: Here’s another first for Mumbai’s Versova beach. It will be the venue for a unique party on Saturday (February 15). This get-together will be hosted by beach warrior Afroz Shah, the man who kick-started the world’s biggest clean-up project at Versova beach back in 2015 that ended up removing more than 20 million kilos of garbage. Talking about the unique Saturday party, Afroz Shah took to Twitter today and said, “Week 226. Tomorrow – 15th Feb – at Versova – there is hot food and snacks, in exchange for plastic waste.”
He further added, “This is a wonderful barter. We want to trade for mother nature.”

Highlighting more about the initiative, Mr Shah said that this get-together is being hosted to train and teach people on how they can help reduce India’s waste burden. He added,

We have been training people for the past few years on how they can reduce their own garbage and live with the environment in harmony. This time, we thought of adding one more uniqueness to the programme by starting a nature-barter system. On bringing in one kilogram of plastic waste, we will give them a free meal – hot samosa, jalebi and chole bhature.

Tom – 15th Feb – at Versova- there is hot food and snacks – in exchange for plastic waste .

We want to trade for mother nature .

Mumbai’s Versova beach is not the only location to try out food for the plastic waste barter system. In October last year, Chhattisgarh’s Ambikapur, India’s second cleanest city according to Central Government’s cleanliness survey – the Swachh Suravekshan, became country’s first city to kick-start such a unique initiative. Ambikapur opened a ‘garbage café’ where the poor and homeless are provided food for free if they deposit plastic waste.

After that, Koraput district of Odisha followed in the footsteps of Ambikapur and started a similar initiative where poor people get free cooked meals in exchange for a kilogram of plastic waste. Then, Bhubaneswar Municipal Corporation (BMC) rolled out a similar initiative under which it started serving a meal in exchange for a half kilogram plastic waste.

Recently, Delhi’s South Delhi Municipal Corporation and Gujarat’s Dahod district too launched a similar initiative. In Delhi, one can avail free lunch and dinner in lieu of 1 kg of plastic waste in Vardhman Mall of Dwarka, whereas in lieu of 250 grams of plastic waste, breakfast will be served.