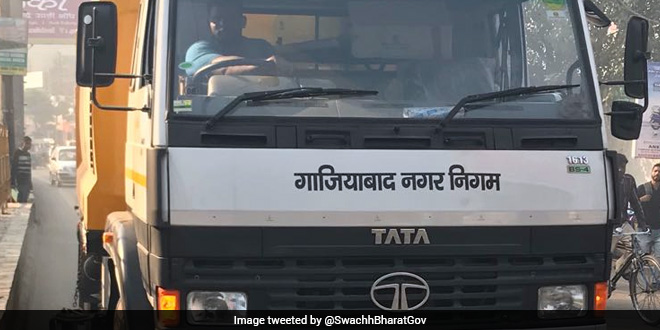 New Delhi: To strengthen the waste segregation at source programme in the city and to take a step forward for a Swachh Ghaziabad, the Ghaziabad Municipal Corporation (GMC) on Sunday launched a scheme for door-to-door collection of daily solid waste in 65 residential wards out of its 100 wards and rolled out 80 new vans that will help in the collection of segregated waste from individual households. The new vehicles were flagged off by Union minister and local MP Gen V K Singh (retd).

Talking about the new vans, the new solid waste collection vehicles have the facility to store both the wet and the dry waste separately, once the collection is done, the municipal corporation will disposed the waste in a systematic manner at a garbage dumping site. What’s great is that, these vehicles have an inbuilt siren that will be blown to alert residents that the garbage vehicle has arrived in their residential area and they should hand over the solid waste.

This is the first phase of the Swachh Ghaziabad campaign, the plan is to replicate this model in rest of the 35 wards soon in the next phase of the campaign, confirmed the GMC officials.

All the wards will be covered under the door-to-door collection scheme by the next month. It is a mandate for all the officials and staff of the corporation that solid waste should be collected in time and no dumping of garbage alongside major roads should be done, said the GMC official.

Under the same scheme, the corporation will also distribute green and blue garbage collection bins to nearly 1 lakh households that will facilitate segregation of garbage at home. For the collection process, each household will be required to pay ₹40 to ₹70 per month as user fee.

This solid waste management scheme was already running in four residential wards of the city and has now been expanded to 65 wards. On the future front, the corporation in 3-4 months’ time will be coming up with solid waste transfer stations within the city that will help convert the solid waste into electricity.

In the recent ‘Swachh Survekshan’ rankings, Ghaziabad fared badly and secured a dismal 351st spot of a total of 434 cities that were surveyed. The reason behind this below par performance was mostly because of poor solid waste management in the city, in a bid to improve this; the corporation has undertaken all these steps. The aim of Ghaziabad is to complete the full chain of solid waste disposal that requires scientific collection, segregation and scientific disposal on priority basis.

Apart from the solid waste management schemes, the corporation has also undertaken various other tasks to ensure sanitation and cleanliness in the city, which includes mechanical sweeping and night-sweeping. For this the corporation has procured four new dust cleaning vehicles that will have water sprinkler and suction system which will help clean the roads effectively.

Currently, mechanical sweeping of 36 roads in the city and night sweeping is being conducted at 15 locations. The corporation aims to procure more vans to boost the solid waste management system soon, added the official from the municipal corporation.