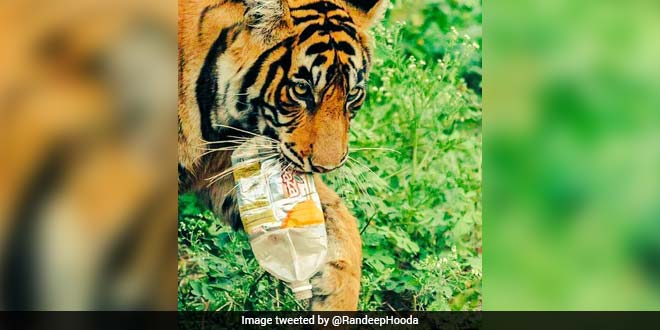 New Delhi: This discarded plastic bottle could have been in the trash bin, if, we waste generators had thrown it properly. But, sadly it is not! It is there in the mouth of one of the tigers at Ranthambore National Park in India. Actor Randeep Hooda who has been continuously fighting for the swachh cause, shared an upsetting image with the netizens on Twitter that shows all that is going wrong with our planet, he added, “This #Tiger cleaning his home? No!! It’s us dirtying it. Heartbreaking image taken at #RanthamboreNationalPark.”

This #Tiger cleaning his home? No!! It’s us dirtying it. Heartbreaking image taken at #RanthamboreNationalPark #SwachhBharat @VasundharaBJP pic.twitter.com/RHZLHns15h

Sadly, this is the reality of thousands and thousands of animals out there. In numbers, it is estimated that around 100,000 marine creatures die every year from plastic entanglement and approximately 1 million sea birds die from eating plastic. Talking about tigers, the endangered species, in India, we are left only with some 3,000 tigers. The last thing that is need is plastic waste intruding its habitat and affecting its ecosystem

This is not the first time, world has seen such a tragic picture that speaks a thousand words about the growing plastic menace. Recently, a photo of a tiny orange seahorse clinging on to a pink plastic cotton swab in blue-green waters around Indonesia was trending around web, that portrayed just deep rooted the problem of plastic really is.

So how does plastic kills or injures animals? When plastic is ingested, it can get lodged in the windpipe, obstructing airflow that eventually causes suffocation. And if it makes its way into the digestive tract, plastic debris can either block the tract, or accumulate in the stomach, producing a false sense of fullness, causing the animal to stop eating, resulting in malnutrition and slowly starves the animal to death. The problem with plastic is that it cannot be digested; even a small plastic bag which is used for mere seconds by users, takes some 1000 of years to decompose completely. Today, incorrect disposal of plastic waste by the waste generator is creating dire and, at times, fatal consequences for environmental ecosystems and for our fellow inhabitants – animals.

It is high time now, we start taking better decisions individually and collectively to significantly decrease the levels of plastics use and pollution. Otherwise, soon our planet will choke in plastic pollution.