New Delhi: It is 8 in the morning and you are running late for the office. Your maid is on a leave because a 30-year-old woman in her area died. On enquiring you get to know that unhygienic menstrual practices led to her death. You ponder how this is possible because sanitary napkins are safe. But the fact is 88 per cent of the menstruating women in India depend on unhygienic alternatives like sand, rags, leaves, etc. Around 60,000 cases of cervical cancer deaths are reported every year from India, two-third of which are due to poor menstrual hygiene. In order to improve these numbers, a student group from SRM Institute of Science and Technology, Chennai, has launched an initiative to provide low-cost sanitary napkins to women and girls residing in slum areas for free.

Through research and survey, Blooming Beacon, a student group devoted towards social work found that women in slums of Perungalathur depend upon unhygienic alternatives which often lead to death causing diseases. It is then they decided to work in towards raising menstrual hygiene.

As soon as we got to know about the problem, we thought we should find a solution. We started brain storming on what we can do and how we can raise the level of menstrual hygiene. We encountered two major problems, lack of awareness and lack of affordability. We decided we want to work on both, provide sanitary napkins for free and at the same time raise awareness, says Saranya Suresh, 4th year student and a member of Blooming Beacon while speaking to NDTV.

The group knew what they wanted to do, but was not sure about the road to walk on. While searching for a viable solution, the group came across FuelADream, a crowd funding platform and collaborated with them. 89 students from the group got together along with FuelADream and started a campaign ‘Gift Pads, Gift Hygiene’ to raise funds to procure sanitary napkins for some 3,500 women and girls.

The students came to us and told us about their plan. To procure a yearly supply of sanitary napkins for one woman they needed Rs. 250. The target was some 3,500 individuals and there were 89 students so they decided to bring in Rs. 10,000 through crowd funding and help 40 women each. Initially, they thought it was impossible to raise such a huge amount, but we trained them on how to run a crowd funding campaign, tells Ranganath Thota, founder of FuelADream.

Also Read: Sanitary Napkin PadBank: Here’s How Some Women Are Pushing The Menstrual Hygiene Cause

What seemed like an impossible task garnered huge positive response from people from all walks of life. The three week long campaign started in February got extended till March 31. Not only this, 26 out of 89 students managed to collect more than Rs. 10,000.

From Facebook, Twitter, Instagram to Snapchat, we made use of each and every possible platform. Through social media we reached out to thousands of people and urged them to donate for a cause. I myself have collected 30,000 and aim to raise this number as we still have 17 days left, says Saranya. 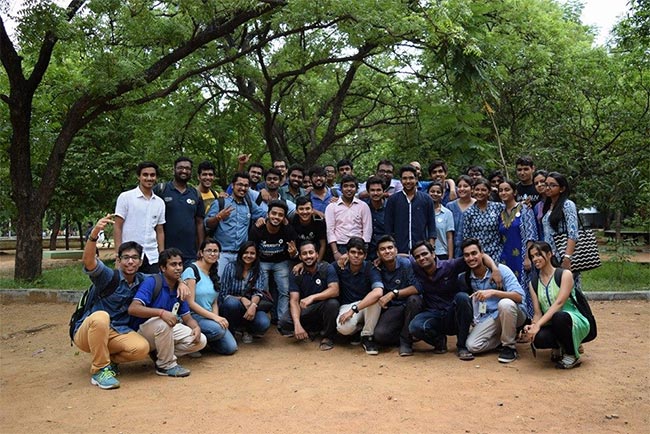 As of now, the group has collected around 6,40,000 against the target of 8,90,000. The student group is in talks with numerous sanitary napkin manufacturers for the bulk order. The implementation i.e., distribution of sanitary napkins will begin from April 1. The campaign will benefit women and girls residing in eight different slums. In addition to this, depending on the response of the beneficiaries, the group plans to continue with the initiative and benefit more and more women and girls.

We will not give the entire stock at once. The distribution will take place on a monthly basis. With the help of the officials and nurses, we will both distribute and aware women and girls. The aim is not to just distribute sanitary napkins, it is to make them understand the importance, says Saranya.

It is a small attempt by us to bring a change by involving society. We hope this will motivate others to do something similar and then we all would say ‘We rise by lifting others’, says Ayush Daadich, President of Blooming Beacon.