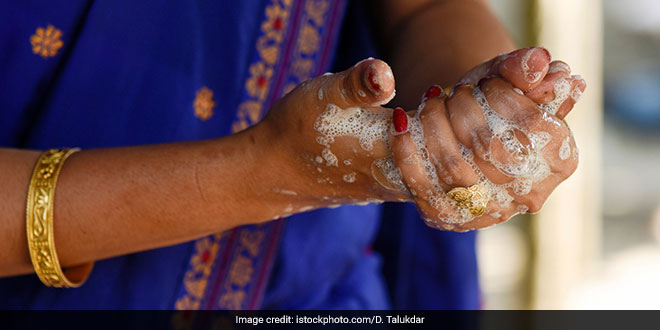 New Delhi: “For 14 days we don’t have a soap at home and we can’t buy it as my mother is waiting for her next month’s salary which she will get at the end of this month. Earlier, when my school was open, we used to get a handwashing kit from there, but now since we all are at home, the usage of soap has increased and we are running out of a soap bar faster than ever,” says 13-year-old Kajal who lives with her mother and brother in Harjan Basti area of Noida. When asked how many times she washes her hands in the era of coronavirus, Kajal laughs and respond, “We have a habit of washing hands only once as that’s all we can afford, I usually wash hands in the morning after toilet usage. The more we will use soap the faster it will run out. Usually, we have a target of using a soap bar for at least 2 months’ time. When I used to go to school, there we were asked to wash hands at regular interval, after using a toilet and before eating our meals. But those habits are a thing of past.”

We look at some challenges facing Indian households when it comes to adoption of handwashing:

1. Just 35% Indian homes wash hands with soap, water before having meals: While the experts and government recommend washing hands with soap and water at regular interval and terms it as a way to protect oneself from the coronavirus, a survey done by the National Statistics Office (NSO) (a wing under government of India Ministry of Statistics and Programme Implementation) shows that it’s not a habit that is practised in most Indian households. As per the survey, while members of most households (99 per cent) wash their hands before a meal with water alone, only those in 35.8 per cent households do so using water and soap both.

The survey also revealed a wide gap in the hand-washing practice in urban and rural areas – while members of 56 per cent urban households reported washing their hands with water and soap before eating, only 25.3 per cent households in rural areas did so.

Also Read: 77% People Changed Their Handwashing Habits Due To COVID-19, Finds A Study By WaterAid India

3. Researchers from the Institute for Health Metrics and Evaluation (IHME) at the University of Washington in the US in their recent study done to evaluate the access to soap and clean water in coronavirus times stated that more than 50 million people in India do not have access to effective handwashing, putting them at a greater risk of acquiring and transmitting the novel coronavirus.

The study, published in the journal Environmental Health Perspectives found that in 46 countries including India, more than half the people lacked access to soap and clean water and said that these countries have temporary fixes, such as hand sanitiser or water trucks. But implementing long-term solutions is needed to protect against not to protect the community from other diseases.

4. As per the World Health Organistion, 4 percent of all deaths and 5.7 per cent of all disability or ill health in the world is due to poor drinking water access, unimproved sanitation and poor hygiene practices. 2017 WHO report titled, “Forgetting to wash your hands can cost lives.” IT also highlights that in India and many low- and middle-income countries practicing good hand hygiene is not easy because many don’t have access to water or soap.

5. As per a report on the country’s water crisis last year the NITI Aayog, a policy think tank for the Indian government, found that 82 percent of rural households, 146 million homes in all, do not have piped running water. And, nearly 60 percent of urban households don’t have it either. Which means, these areas rely on water tanks which deliver a maximum of 20 to 25 liters of water per person per day— it is enough for handwashing practices, but only if the villagers use water for nothing else.

Also Read: Global Handwashing Day: Only 2 Out Of 10 Poor Households In India Use Soap, Survey

Why Handwashing Is Important?

Experts say, hands are the principal carriers of disease-causing germs and therefore handwashing becomes a very important step for prevention of any disease. According to the World Health Organization (WHO), inadequate availability of water, sanitation, and hygiene results in 8,27,000 deaths in low- and middle-income countries each year.

According to Wateraid organisation, only 1 in 5 (19%) people globally wash their hands with soap after defecating. It further states that 443 million school days are lost every year because of water-related illnesses and lack of access to sanitation and poor hygiene contribute to approximately 88% of childhood deaths caused by diarrhoeal diseases.