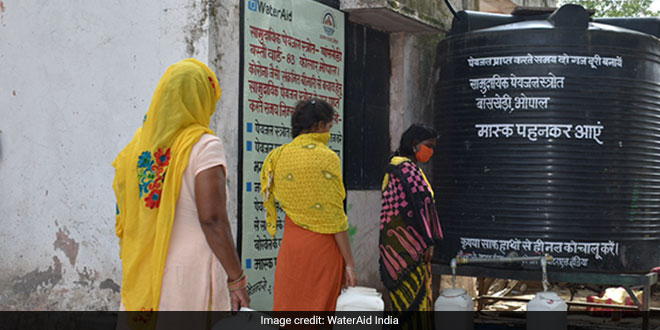 New Delhi: Access to clean water is essential for inculcating and sustaining handwashing practices, which have assumed importance as key method to prevent COVID-19. NGO Aarambh WaterAid India has set up a decentralised water distribution system 15 slums in Madhya Pradesh’s capital Bhopal. In these 15 intervention slums for regular water requirements, around 73 households are dependent on one borewell, whereas 746 households from four intervention slums are dependent on water supplied by tankers. It is a normal site to witness crowding, long queues, and quarrels among the slum dwellers near community water points. On the arrival of the tanker, riot-like situations breakout where every resident tries to get their share before the water finishes, shares the spokesperson from WaterAid India. In such conditions, maintaining physical distancing is a luxury for the slum dwellers. In fact, it can be a potential threat to the spread of coronavirus, apart from the struggle to access water, for frequent handwashing and hygiene upkeep. 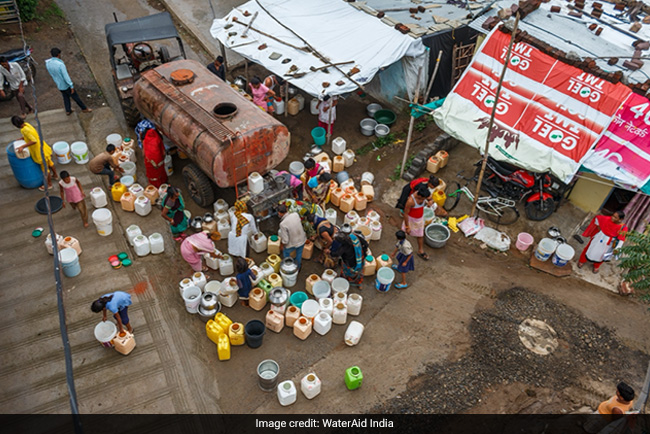 In these slums, on the arrival of the tanker, riot-like situations are created wherein every resident tries to get their share before the water finishes, shared the spokesperson from WaterAid India

To help combat the situation, WaterAid India and Aarambh, a Bhopal-based NGO, have demonstrated a decentralised water distribution system. The spokesperson from WaterAid India explained,

Under this system, multiple water points have been provided to the community from the borewell. This has reduced the dependency rate to approximately four households per water point. This system has not only facilitated proper physical distancing between the residents but has also helped in preventing the spread of the coronavirus. Aarambh has demonstrated ten such models in eight intervention slums. The conditions in these slums are now far better than other slums. With the water supply, we have been urging the population to frequently wash hands and save lives – of themselves and their community members’.

In Anandpura, a slum situated in ward 62 of Bhopal city, the decentralised water distribution system has been established and is maintained by the women’s group of the slum. Abida Bi, the president of women’s committee proudly claimed,

We have succeeded in preventing the spread of the coronavirus in our slum by sealing the entry and exit points. We are not allowing any one to go out of the slum or to gather in one place. Earlier, water was a big issue, for which we had to go to the borewell and wait for our turn. If that situation had still existed, then perhaps we would not have been able to stop the spread of the virus in our slum.

Stating that now they had enough water for their needs, Sayra Khan of the same slum said that they were now able to frequently wash their hands, carefully sanitise their groceries and maintain proper hygiene.

In the 100 Quarter slum of ward 63, one stand-post is being used by around four families. When the lockdown was enforced, they went a step further to safely fulfil their water requirement. Households using water from the same stand-post jointly arranged a plastic pipe and each household takes turns to bring water to their home through that pipe.

Hakki Bai, one of the residents of the slum, says,

The surroundings of the borewell from where we fetched water are very unhygienic. But now we have ease in accessing water, which helps us in maintaining proper hygiene and we can wash our hands whenever we want!

In the Nehru Nagar slum of ward 63, the whole community has been covered under the decentralised water distribution system through 33 stand-posts with 66 taps. 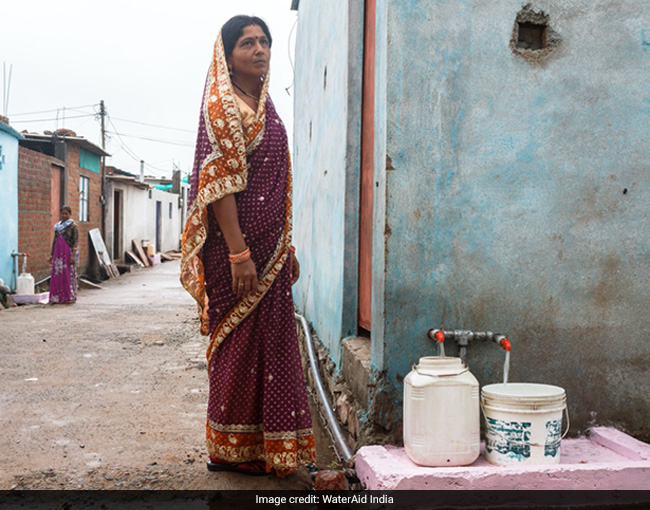 In Bhopal’s Nehru Nagar slum, the whole community has been covered under the decentralised water distribution system through 33 stand-posts with 66 taps

The case was a little different in this slum which has encountered four cases of coronavirus in three households. The first infected person was a girl who had visited relatives in Ahmedabad. The other cases were from adjacent houses.

Farhat Khan, a member of the women’s group says,

The infection spread only to those three houses because they were fetching water from the same stand-post. If all of us had been gathering at the same borewell as we used to earlier, it is possible that this virus would not have spared a single house in the slum.

The decentralised water distribution system has also been implemented in Baskhedi slum of ward 83, but in a different way. Here, the entire community is dependent on tankers for their water supply. When the tanker arrives, people forget all about physical distancing; the only thing that stays in their mind is to get the water before it finishes.

After WaterAid India and Aarambh’s intervention, now, two taps linked to a storage tank have been installed. The tanker fills the storage tank and people fill their water from the taps. Women’s group members monitor the system and ensure that everyone gets sufficient water while maintaining an appropriate physical distance.

The decentralised water distribution system has helped slum communities combat this crisis situation across Bhopal. Access to handwashing infrastructure, along with the establishment of a proper water system, has facilitated the management of fear and the coronavirus.

Handwashing Is Still A Challenge In India, Here’s Why