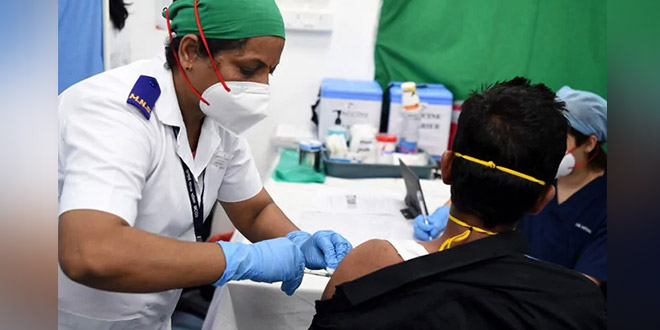 New Delhi: With a low turnout of healthcare workers on the first two days of the COVID-19 vaccination drive, Delhi Health Minister Satyendar Jain on Tuesday (January 19) said the exercise is voluntary and a matter of “personal decision” for people whether to get a shot or not, but all efforts are being made to boost their confidence. Nearly 3,600 healthcare workers were inoculated in Delhi on Monday, a further dip in the figures compared to that on the opening day of the immunisation drive, with sources saying just eight medical staff got the jabs at AIIMS. “The target of the day in Delhi was 8,136, and 3,598 got vaccinated, which is 44 per cent of the targeted figure,” he told reporters.

Mr. Jain reiterated that this is a voluntary exercise and people are making their own decisions, as it’s the initial phase. Asked if statements made by a few political leaders raising doubts over its efficacy and safety, could be a factor, he said,

No. Going for vaccination is a personal decision, and has nothing to do with what political statements have been made about it.

Under the nationwide mega vaccination drive launched on Saturday, a total of 4,319 (53 per cent) health workers against a target of 8,117 were administered the vaccines at 81 centres across the city. The sharp fall had come after one severe and 50 minor cases of AEFI (adverse events following immunisation) were reported on Saturday.

On Tuesday, 26 cases of AEFI, were reported, including two severe ones. One of them had to be hospitalised.

According to the Union Heath Ministry officials, the person was sent to Max hospital at Patparganj. Mr. Jain said a doctor of LBS Hospital has to be hospitalised after AEFI.

When asked if AEFI was a factor in low turnout on the second day, the city health minister said, turnout of nearly 50 per cent is “not very low” and coronavirus situation is also under control in Delhi.

It’s initial days of the drive, and it will take time, but people’s confidence will be increased, and it will pick up. As a government, we are also taking all the steps to push up their confidence level, he said.

Asked if technical issues with CoWIN app were also a factor, he said the app is “creating hurdles” at times. “Sometimes, it is not working, and it has not stabilised yet,” Mr. Jain said, adding, there is no plan to do the job manually. At the Delhi government-run LNJP Hospital, only 12 healthcare workers got vaccination on Monday, compared to 32 on day one, as per data shared by officials.

No one showed AEFI at this site, a senior official said. At Rajiv Gandhi Super Speciality Hospital, the number for Monday stood at 20, nearly half of the figures on day one — 45, officials said. Delhi recorded 161 COVJD-19 cases on Monday, the lowest in nearly nine months with a positivity rate of 0.32 per cent.

The fresh cases and actives cases, both have come down a lot. Seems, the situation is lot under control now in Delhi, he said.

Number Of People Vaccinated Against COVID-19 More Than Double Of Number Of Active Cases: Government

Preventing The Spread Of COVID-19 With Face Masks