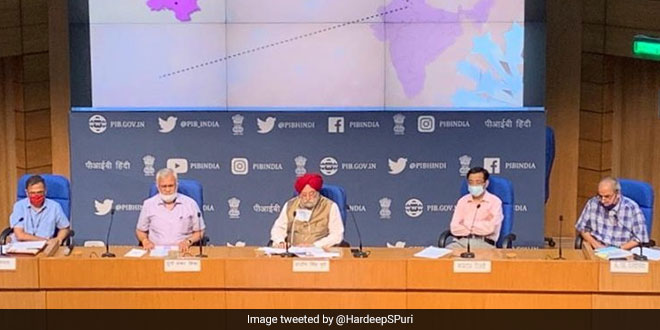 New Delhi: On Tuesday (May 19), Hardeep Singh Puri, Minister of State (I/C) for Housing and Urban Affairs announced the results of the star rating of garbage-free cities for the year 2019-2020. The star rating of garbage-free cities evaluates cities on the basis of cleanliness indicators and accordingly rate on the scale of 1 to 7. As many as six cities namely – Ambikapur, Rajkot, Surat, Mysuru, Indore and Navi Mumbai – have been certified as 5-star. While 65 cities have been certified as 3-star, 70 cities have got the 1-star rating. Congratulating the cities for their performance, Mr Puri, said, “I am sure this will inspire all cities to improve their ratings in future.”

Also Read: COVID19: The 21-Day Coronavirus Lockdown Leads To A Massive Drop In The Dry Waste Generation In Gujarat’s Ahmedabad

According to the information shared by Durga Shanker Mishra, Secretary, MoHUA, there is a three-stage assessment process for star rating of garbage-free cities. In the first stage, ULBs (urban local bodies) populate their progress data on the portal along with supporting documents within a particular timeframe. In the second stage, a desktop assessment is done by a third-party agency selected and appointed by MoHUA. ULBs that clear the desktop assessment move to the final stage – independent field-level observations.

In the 2019-2020 assessment, 1,435 cities applied of which only 698 cities cleared the desktop assessment which is the second stage. In the third stage, 141 cities have been certified with star rating.

During the assessments, 1.19 crore citizen feedbacks and over 10 lakh geo-tagged pictures were collected and 5175 solid waste processing plants were visited by 1210 field assessors. The low number of certifications signifies the rigorous and robust certification mechanism of the protocol, said Mr Mishra.

Addressing the current coronavirus pandemic and the pivotal role Swachh Bharat Mission – Urban has played in ensuring sanitation and cleanliness which has become the need more than ever, Mr Puri said,

The importance of sanitation and effective solid waste management has been brought to the forefront now due to the COVID crisis. In fact, it would not be an exaggeration to say that the present situation could have been much worse had it not been for the critical part that SBM-U has played in the last five years to ensure a high degree of cleanliness and sanitation in urban areas. Five years ago, we introduced Swachh Survekshan (SS), the annual cleanliness survey for urban India that has proven immensely successful when it comes to improving urban cleanliness through a spirit of healthy competition.

All About Star Rating Protocol

To tackle the problem of poor waste management in urban India, in January 2018, the Ministry of Housing and Urban Affairs (MoHUA) had launched a unique initiative – the 7-star rating system. The aim of the 7-star rating system was to institutionalize a mechanism for cities to achieve garbage free status and achieve higher degrees of cleanliness. As part of the star rating protocol, urban spaces of the country are evaluated on the basis of multiple cleanliness indicators with regard to waste management – door to door waste collection, waste segregation, plastic waste management, cleaning of drains and water bodies and others – and rated accordingly.

The new protocol will consider ward-wise geo-mapping, monitoring of the solid waste management value chain through ICT (Information and Communications Technology) interventions like Swachh Nagar App and zone-wise rating in cities with a population of over 50 lakh.

From 100 To 1 Lakh COVID-19 Cases In 64 Days, India Ahead Of USA, UK In Slowing Down Infection Spread