New Delhi: The Minister for Housing and Urban Affairs Narendra Singh Tomar today announced the launch of a sanitation survey of humongous  scale, which will commence on January 4, 2018 and will go on for two months before the results are declared towards the end of March. The Swachh Survekshan in its third year and will cover all 4,041 Indian cities, almost 10-fold increase from last year’s 434 cities. With so many cities being covered in the survey, the upcoming Swachh Survekshan is believed to be the largest ever sanitation survey in the world covering nearly 40 crore people. “Along with the society and government, cleanliness is also about principles. Swachh Survekshan is a very important step towards Swachh Bharat Abhiyan and I feel immensely proud as I launch it,” said Mr Tomar at the launch event held in the capital.

The municipal bodies will be marked on six swachhta indicators including,

From emphasising on citizen’s feedback, waste management and progress in implementing cleanliness, increasing points for elements like independent observation of sanitation and negative marking to introducing a new ‘innovative’ category, Swachh Survekshan 2018 will ensure sustainability of improved sanitation services and will focus on their outcomes and its visible impact on ground.

Here are the 6 things every civic body and citizen must know about Swachh Sarvekshan 2018 to get the best results:

1. Inclusion of all cities |  In 2016, 73 Indian cities took part in Swachh Survekshan. In 2017, the number grew tremendously and 434 cities were assessed by the government in sanitation and cleanliness. With an aim to scale up the mass movement, the upcoming Swachh Survekshan will be carried out in all 4,041 cities of India. Of the total cities, 500 will have an all India ranking and 3,541 cities will have state and zonal rankings.

2. Changes in Weightage of Waste Treatment | “Garbage generation is increasing day by day and if no concrete changes are made in its disposal methods, India will have to go through a huge crisis,” said Mr Tomar. To address the mounting problems of waste disposal, the government has increased marks under the ‘Processing and Disposal’ by 5%. Cities will be marked on condition of landfills, percentage of wet and dry waste treated, percentage of biodegradable waste discarded onto the landfills, remediation of existing dumpsites undertaken, sale of city compost in last two quarters of 2017, and so on. Durga Shanker Mishra, Secretary, Ministry of Housing and Urban Affairs, who was also present at the launch, said that government is making efforts to discourage waste from going to landfills. Nearly 145 composting plants are functioning across the country and 150 plants are under construction. To convert waste into electricity, 400 plants are being set up, Mr Mishra said. To inculcate the habit of waste segregation, a Teaching Aid handbook titled, ‘Har Din Do Dustbin’ was released today. The book will be circulated in all the municipal bodies.

3. Revised Marksheet |  In the next sanitation survey, the Ministry of Urban Development (MoUD) has revised the weightage for overall assessment. The government has given more weightage to citizen feedback by increasing it from 30 per cent to 40 per cent. It has lowered the municipal documentation or data given by municipal corporation from 45 per cent to 35 per cent as compared to last two years. Out of the total 4,000 marks, 1,400 marks will be allotted in 3 phases – Service Level Progress i.e. data collected from civic bodies and citizen’s feedback. Direct or On-Field Observation have been given 1,200 points. 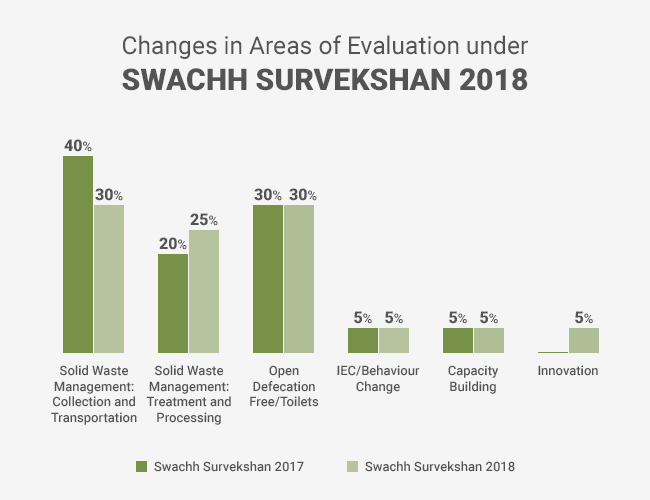 In addition, there will be negative marking in Phase II. Once all the Swachh indicators are confirmed by Urban Local Bodies in part 1 of the survey, there will be negative marking in Phase II if on-field validation do not match the status provided in part 1. For instance a sample of 10 households from 4 zones where source segregation is in place will be selected randomly. If 3 or more households answer is ‘No’, then the civic body will receive -16 score for this indicator. A similar practice will be carried out for all six swachhta indicators.

5. Sustainability: A New Thrust | “Swachh Survekshan 2018 will ensure sustainability of improved sanitation services and focus on their outcomes and visible impact on ground,” said Mr Mishra. To evaluate if progress made by the cities during the previous two Survekshans is enforced, the survey will consider additional points under sanitation. For example, in the already declared ODF regions, the government will examine if water connection is sufficiently provided to all the constructed toilets. Likewise Operation and Maintenance (O&M) of community/public toilets, source segregation, composting by bulk garbage generators will be evaluated.

According to South Delhi Municipal Corporation, the additional features are part of efforts to improve Swachh Survekshan 2021 ranking and getting ODF++ status