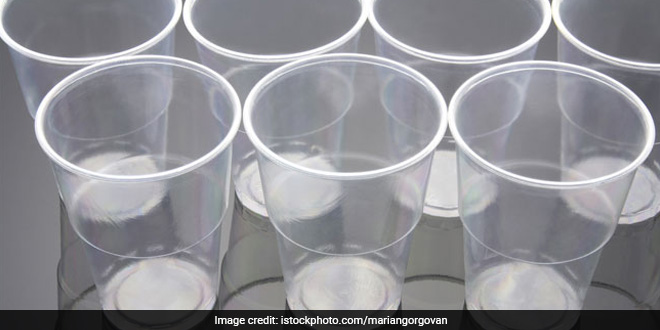 Ahmedabad: Plastic cups having minimum thickness of 50 microns can be used in the state, the Gujarat High Court has ruled. The court passed the order recently on a petition challenging the ban on the use of plastic cups imposed by eight civic bodies in the state, including the Amdavad Municipal Corporation (AMC).

The Gujarat Plastic Manufacturers Association had filed the petition challenging the notifications issued by the AMC and other civic bodies banning all kinds of plastic cups and bags saying they pose an environmental hazard.

The AMC had issued the notification in April 2015, which was challenged by the association in the high court. This was followed by similar notifications by other seven municipal corporations.

The court of Justice R M Chhaya in its order said that as per the rules laid down by the Centre, the plastic cups whose thickness is 50 microns and above, are allowed for use.

The lawyer for petitioner Rajan Patel had told the court that as per section 4(C)(D) of the Plastic Waste (Management and Handling) Rules, 2011 of the central government, plastic cups and bags of thickness of 50 microns and above are allowed to be manufactured.

During the course of hearing, the state government had also agreed to the fact that the rules regarding the thickness of plastic bags have already been determined by the Centre.

“As per these communications (made by the state government) it is pointed out that the minimum thickness is prescribed at 50 microns keeping in the mind of the provisions of 4 (C)(D) of the  Plastic Waste (Management and Handling) Rules, 2011…It is also stated that thickness of all plastic products shall be 50 microns,” the court said.