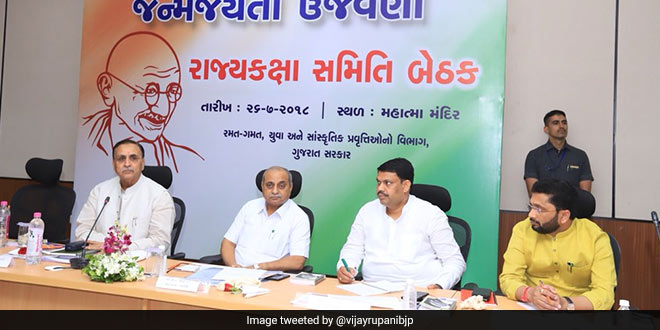 New Delhi: After improving sanitation conditions across rural and urban Gujarat, the state government has come out with a comprehensive policy for solid and waste management. now that Both rural and urban Gujarat have been declared open defecation free (ODF), The state government is now looking to strengthen the waste management infrastructures across Gujarat. Under a new policy, The ‘Urban Sanitation and Cleanliness Policy’, which was unveiled by Gujarat Chief Minister Vijay Rupani on July 26, not only will it see more public toilets built in urban areas in the state but also focus more on waste management.

Collection of waste in Gujarat’s urban areas will be streamlined. Gujarat presently generates more than 8,300 metric tonnes of solid waste daily. Under the new policy, all major urban civic bodies have been asked to ensure 100 per cent waste segregation to ensure less generation of solid waste. The policy also allows civic bodies to make their own laws, regulations and draw up rules with regard to penalties for violators. Under the new policy, Gujarat is looking to reduce dependency on landfills and send collected waste directly to waste treatment plants. Construction waste will be recycled and reused.

“Under this new policy, the idea is to first reduce the generation of waste by encouraging segregation in households, resident welfare associations and bulk waste generators like malls and hospitals. With 100 per cent waste segregation, the amount of waste generated will come down, which will ease the pressure on urban civic bodies,” said Anand Zinzala, Joint Secretary, Urban Development and Housing Department.

The policy has set a goal to make all Gujarat cities zero waste within the next five years. Manual scavenging has been taken UP as an absolute priority by the state and the new policy has provisions for eradication of manual scavenging completely from the state. Gujarat has only 146 registered manual scavengers as per the nationwide survey conducted by Ministry of Social Justice and Empowerment, but the number could be far higher at 5,000, as estimated by the Safai Karmachari Andolan, an independent NGO working to rehabilitate manual scavengers. The civic bodies have been directed to identify spots of open defecation, open drains and sewage systems in cities and prevent employment of manual scavengers to clean such places, and rehabilitate them in process.

At the launch of the policy, the Gujarat CM said that individual households should also be responsible towards generation of less waste, both solid and liquid. Civic bodies have been instructed to encourage households to have in place sewage water recycling systems. Such systems will ensure that water is not wasted. The new policy also makes it mandatory for all households to have their drainage systems linked directly to sewage treatment plants (STPs), to avoid direct flow of sewage into lakes or rivers.

“Individuals households are often ignored when it comes to liquid waste. We have asked civic bodies to ensure that households in cities are encouraged to practice sewage water recycling so that water wastage can be checked. Manual scavenging is a priority as urban development cannot continue at the cost of such a practice. We have asked civic bodies to take UP eradication of manual scavenging as a top priority,” said Mr Zinzala.

The government’s priority to work on eradicating manual scavenging has been welcomed by the Magsaysay Award winning activist Beswada Wilson. Mr Wilson said that it was a positive sign that the state government had openly acknowledged the existence of manual scavengers and was willing to work towards their rehabilitation.

Gujarat’s performance in Swachh Survekshan (Urban) 2018 saw a dip as the state was ranked as India’s 17th cleanest state from the earlier rank of 11. Apart from Ahmedabad, which improved its rank from 14 in 2016 and 2017 to 12 in 2018, none of Gujarat’s major cities showed much improvement.

The new policy of Gujarat’s urban development is in line with the ODF plus status, as defined by the Swachh Bharat Abhiyan guidelines. The pluses from the new policy are the focus on manual scavengers and individual households being asked to recycle sewage water. With its new zero-waste policy in place Gujarat will not only look forward to better rankings in the coming Swachh Survekshan, but also becoming an ODF plus state.