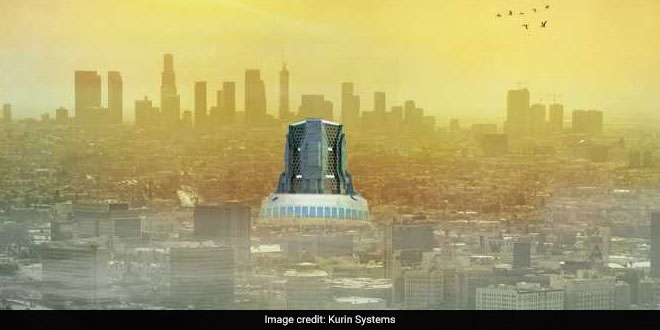 New Delhi: The toxic air quality in the National Capital Region and everywhere else in the world, is a serious health hazard. Cities across the world look for innovative ways to tackle air pollution and prevent people from choking. China is trying out an experimental ‘anti-smog’ tower over 100 metres (328 feet) high in northern China’s Xian in Shaanxi province. The tower is a humungous air purifier and as per the Chinese scientists behind the project, it has brought a noticeable improvement in the air quality.

Before China installed this tower in Xian, a Gurugram (Gurgaon) based air purification start-up, Kurin Systems, has been working on the concept for Delhi-NCR for about 3 years. Kurin Systems has patented a purifier specially designed keeping the national capital’s air condition in mind, a single one of these purifiers can provide clean air in the 3 km radius of their placement impacting the lives of an estimated 75,000 people on a daily basis. The patent for the device, which is currently at the pilot stage, has been published by the World Intellectual Property Organization.

The City Cleaner is expected to have a capacity to clean about 32 million cubic meters of air per day as compared to Smog Tower’s 10 million. It will be able to take in air from 360 degree angles, enabling it to generate 1.3 lakh cubic meters of clean air in an hour. The purifier will be using the highly effective H14 grade HEPA Filter, known for being able to clean up to 99.99% of the particulate matter present in the air in conjunction with a Pre-Filter and Activated Carbon.

Activated Carbon is charcoal that has been heated or otherwise treated to increase its adsorptive power whereas a pre-filter is a device which removes unwanted large matters from the air or water. The mammoth purifier is said to have 48 fans to keep the flow of clean air going.

Kurin City Cleaner is an eco-friendly device which will run on energy generated via solar panels and will be made in India and with materials sourced locally, explained Pavneet Singh Puri, Co-Founder of Kurin Systems.

We have been working on this for a long time now. I really feel that clean air only at home is not a solution. We are currently doing a lot of innovative things in India and mass air cleaning should be a part of the growth and development agenda too, as clean air should not be available only to a section of society which has the money to buy the at-home purifiers. What we have planned to develop will be the world’s largest and the strongest air purifier. China has already witnessed huge success with their Smog Tower in Xian which has been successfully able to clean 10 million cubic meters of air daily. But City Cleaner will be to clean 3 times of that number, Mr. Puri added.

The founders also told NDTV about their plan to tie up with private builders to install these in residential complexes in addition to central and state government.

Madhur Mehta, Co-Founder of Kurin Systems said, “We have been pitching the idea of city-level air cleaning to central as well as the state governments hoping to make a headway soon. We wish to show how tremendously effective this technology can be if used before things get out of hand. We can still save this city and this country and most importantly countless lives.”