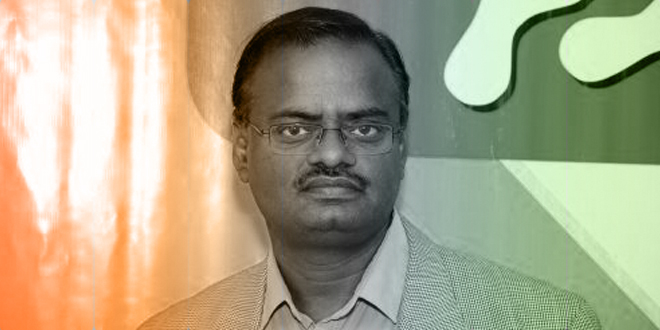 New Delhi: Chaitali Rathod from Akola, Maharashtra was 25-year-old when her parents fixed her wedding in 2015. Though Chaitali was excited to begin this new phase in her life but one thing was there that kept on disturbing her and questioning her parent’s decision. Chaitali’s in-laws didn’t have a toilet at home and she was not ready to give up on this one main thing after marriage because she had one at her own home and she knew the importance of having this basic right. When Chaitali’s parents started arranging for her trousseau, she asked them not to give her anything except a toilet. The toilet has become one of her most prized possessions since then and it was not just a regular toilet, but a low-cost bio-toilet that helps treat human waste on its own without polluting the environment. The toilet was designed by her uncle Arvind Dethe who started contributing towards the cause of Swachh Bharat Abhiyan in the year 2014 after getting inspired by Prime Minister Narendra Modi.

Since then, this Toilet Man has changed the lives of thousands of people like Chaitali and helped set up more than 1 lakh bio-toilets across India. 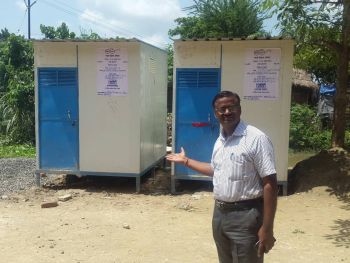 Until 2014, Mr Dethe was known as a production engineer who helped set up 14 fertilizer factories in India from Akola, Maharashtra. He was also given the Bharat Samman award in 1997 for setting up these factories in India.

In 2014, as the first step towards his swachh journey, Arvind formed a group Bharat Ek Kadam that included like-minded entrepreneurs and professionals who wanted to do something for India. Second, together with his group, he started identifying areas where people needed attention and then started looking out for investors who would be interested in uplifting the life of villagers in India. Talking about his journey from being an engineer to now a swachh warrior, 50-year-old Arvind Dethe said,

I wanted to change the very face of rural India by addressing the basic needs of millions of Indians who live below the poverty line. So, when I formed Bharat Ek Kadam – I decided to cater few of the major fields in the state I belong to – Maharashtra. I initiated projects based on sanitation and hygiene and providing safe drinking solutions.

Also Read: ODF Mumbai, A Reality Check: Overused, Unclean And Lesser Number Of Toilets For Women Are Just Some Of Mumbai’s Sanitation Woes 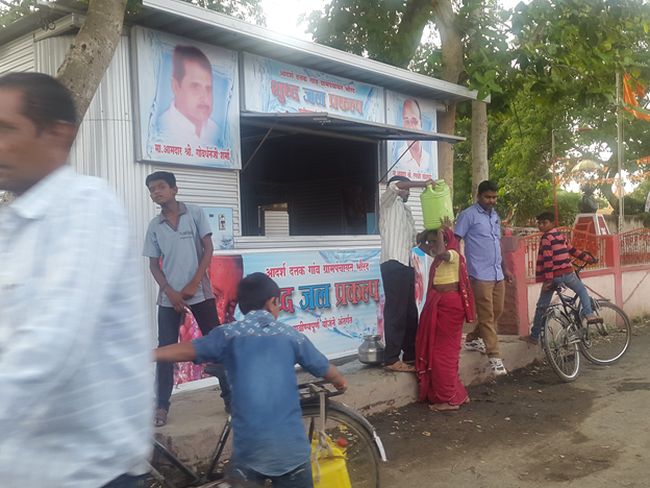 Through a public-private partnership model, wherein an area or the specific location is identified by Bharat Ek Kadam group, then necessary sanctions and permissions are sought and obtained from the government/ local bodies/institutions. And as the last step, the group engages with individuals and or other private parties/institutions who are interested in investing in the project and comes to an agreement to run the business.

Initially I didn’t have any investors. I decided to become an investor myself and give a direction to my swachh endeavors. In India, it is very difficult to take out money from anyone; I knew and accepted this fact. I decided to work on building a sustainable toilet solution that does not pollute the environment and is made with bare minimum facilities and is cost-effective, added Arvind.

Arvind Dethe came up with the plan to construct what he calls ‘cheap-yet-best’ bio-toilets, a technology that helps treat human waste on its own and doesn’t let it go into the sewer lines or out in the open and polluting the environment. Arvind wanted to provide a solution to the problems traditional toilets posed – lack of a self-sustaining, low-cost technique to tackle waste generated. 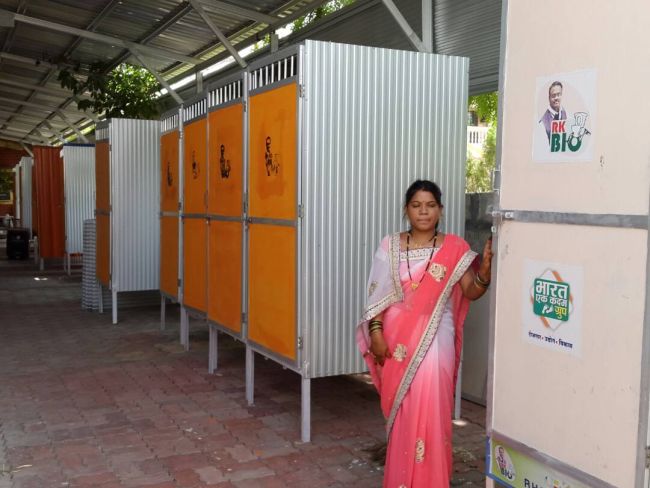 Toilets made by Arvind Dethe are not just regular ones but are bio-toilets, a technology that helps treat human waste on its own

Talking about his innovation, Arvind added,

As a pilot project, I made the design using waste materials since I was the one who had to pay for it. I used the scarp water tank and made a bio-tank, a digestion seat (where the human excreta goes and gets decomposed), pre-filled with anaerobic bacteria, this bacteria basically eat up all the human excreta and leaves behind water and methane gas as the end product. Secondly, I made a small toilet closet prefixed with the bio tank, again made using materials easily available locally.

Arvind’s aim was to make a sustainable toilet solution at a cost of less than Rs 12,000, as that was the amount being given to rural people as subsidy by government to motivate them to construct a toilet at home under the Swachh Bharat Abhiyan that aimed to make India open defecation free (ODF) by October 2019. He adds,

Actually, the construction of the toilet cost an individual Rs.30,000-Rs.40,000 easily. Since the government was providing Rs 12,000 as a subsidy amount, I thought of making one in that very amount. I started designing toilets for my own village, Akola. One of my initial toilets was given to someone in my family only – she was a daughter of my relative and she became Akola’s first daughter who took a toilet with her to her in-laws. The story inspired many in the village; in fact, she also became one of the swachh ambassadors of the village. And since then there was no looking back. We went over everything – from usage to availability etc. Many villages in India do not even have bricks available, the most basic thing which we need in the construction of toilets. Together with different entrepreneurs and individuals, we invented these toilets, said Mr Dethe.

Sharing her story with NDTV about the super bio-toilets, 29-year-old Chaitali Rathod who became village’s first girl to take a toilet as a gift from her parents to her in-laws, said,

Back at home, I had a toilet facility. But when I got to know the house I am getting married to doesn’t have one, it made me disheartened. So, I asked my parents to give me a toilet as a gift and nothing else. And since 2015 I have been using the same bio-toilet without any discomfort, it is like a super toilet that saved my life and honour.

How These Super Toilets Are Different 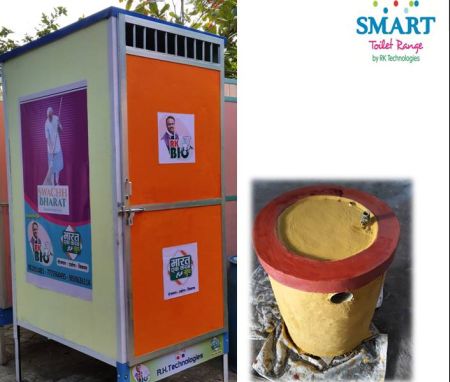 The added advantage of these toilets is that the superstructure can be assembled in just 7 minutes and the model can be transferred to any part of India. What’s more, these toilets require very little water, which is a huge incentive in a tropical and water-scarce country like India. Not just that, these toilets are completely odourless and ensure the total dissolution of waste.

Arvind Dethe after successful pilot projects in his own village started giving training to different entrepreneurs on how to make or build these toilets on their own. As a result, his model started getting accepted in different parts of the country. Soon, the invention caught the government’s attention and it was selected as one of India’s Innovative Technologies and after that Arvind started getting more and more projects in different parts of India.

One of Arvind’s neighbour who has been using community bio-toilet that was fitted by Arvind in 2014 said,

“Earlier we had no other option but to go in the fields and relieve ourselves. We were managing somehow, but open defecation was a problem for our women and daughters. So, when we got access to this bio-toilet in the community, it was a life-changing experience. I remember the first time, my daughter used it and came running to me and said ‘appa, zindagi mein toilet kitna zaruri hai, mujhe yeh aaj pata chala’.” 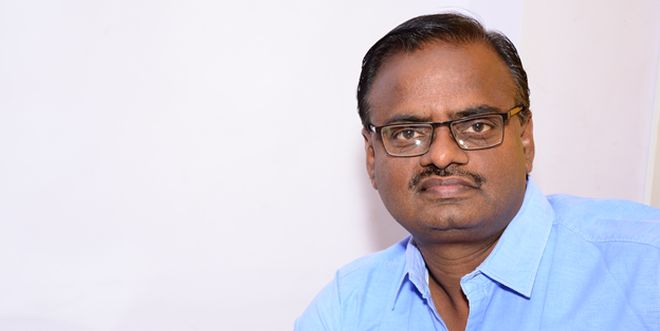 After becoming a pioneer in making low-cost bio-toilets solution across India, Arvind now wants to move on to other solutions in tackling waste. On his agenda are the following –

Shedding details on both of his future plans, Arvind added,

One of the most important things I would like to do is make India get rid of soak pit toilets. The problem with soak pit toilets is in the monsoon or rainy season. When the waste material is flushed into the chambers of the toilet, the wastewater doesn’t get absorbed into the soil during those months, as a result, it ends up polluting the soil or nearby groundwater and that’s the main reason of so many illnesses in the villages during the rainy seasons. Secondly, my aim is to make a wet waste management model in all the villages of India. In the model, I will target one or two people of the community it can be a school or an institute or simply the hospital where a plant will be set up to convert wet waste into bio-energy.

Arvind Dethe, a swachh crusader signs off by saying,

Every individual has the power to come up with solutions – one just needs the will to get started. When I started my swachh journey people didn’t know much about toilets. But, today when you will look around and ask people about the toilets, you will know the difference. This has happened not solely because of the government and their work, but because of different warriors who have come together for the cause. Toilets have been constructed, now it is time to come up and look at other environmental issues. Let’s make our India Swachh!

Heroes Of Swachh India:  Meet Poonam Bir Kasturi, A Bengaluru Woman Who Is Helping India Get Rid Of Its Excess Wet Waste Via Composting