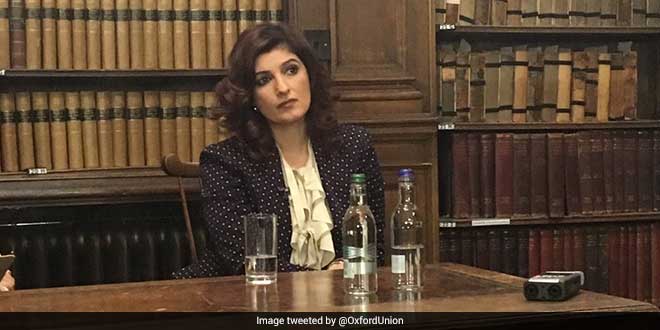 New Delhi: “I hope this movie becomes a movement, where women are no longer held back or shamed by their biological functions,” said actor-writer Twinkle Khanna in her speech at the Oxford Union, one of the most reputed debating societies in the world. Raising the issue of menstrual hygiene at an international level, the actor spoke extensively about the need to detach the stigma attached to the most natural biological function of a woman. She spoke about how movies can start a revolution and serve as a medium for mass awareness and hoped the upcoming movie PadMan, that she is co-producing, starring her husband Akshay Kumar, can do that. Interestingly, the PadMan is the first Indian film to be screened at Oxford Union.

Akshay Kumar, who is essaying the character of Padman shared an excerpt from Twinkle’s speech. In her speech she narrated an incident with Arunachalam Muruganantham, the real life Padman and said,

When I first met Muruganantham he said ‘all country want to be strong, but to make country strong you have make mother, sister, women strong and then country strong and this is a global issue. With PadMan its more than a movie, it is a movement where commercials don’t show blue liquid instead of red, where a president cannot shame a reporter by saying she is bleeding from ‘whatever’ and where we can’t promise our school girls iPad but give them all the sanitary pads they need.

From period taboos to period poverty, @mrsfunnybones​ takes the conversation on menstrual hygiene global at @OxfordUnion, the debating society of #OxfordUniversity pic.twitter.com/1o6zW8HJyP

PadMan, is a movie based on the life of Arunachalam Muruganantham, a social entrepreneur, who revolutionised sanitary hygiene in rural India 20 years ago. After Mr Muruganantham from Tamil Nadu realised that an important topic related to women’s health is brushed under the carpet, he invented a low-cost sanitary napkins machine. Twinkle had essayed Mr Muruganantham life in her book, ‘The Legend of Lakshmi Prasad.

My primary motivation to make a movie on menstruation was to bring awareness to a subject that so far has been tucked away in shadows and like Voldemort is never mentioned, she said.

In her speech, she also highlighted that the lack of awareness towards menstrual hygiene is beyond developing countries and said, “In the beginning, I thought that period poverty was only a problem in my country and countries like Africa, Bangladesh, but groups like Plan International United Kingdom have found that one in 10 school girls in the UK itself are missing school because they are unable to afford hygiene products and end up using substitutes like rolled up socks.”

In the question-and-answer session that followed her speech, Twinkle asked the audience to raise their hands if they were currently on their periods. When almost three quarters of the room raised their arms, Twinkle said: “Now imagine sitting here with a rag cloth or a rolled up sock or even wadded up newspaper between your legs. Would it even be possible for you to study under those circumstances?

Yet, pads are still seen as a luxury item. It is odd that pads are taxed at 12 percent in India but brooms are tax free, because it is more important that you keep your house clean rather than your body, and that America has taxes on tampons but Viagra is in fact tax-free, perhaps because policies are made by 65-year-old men.

Pakistani activist and Nobel Peace Prize winner Malala Yousafzai, who was also present at the occasion extended her support the film and said it gives out an ‘inspiring’ message, “I’m really excited to see the film PadMan… because the message behind the film is truly inspiring.”

In one of the movie’s promotional event, Akshay Kumar had also expressed a similar view and said, “We hope the movie breaks the period taboo.” He had said that one way to break the silence around mensuration is to celebrate it.”

Girls are mistreated during those five days of their menstruation period. This is unfortunate… When you celebrate it, the girl who is already going through a physical and hormonal transition, will feel confident and secure. But we exclude our women from the normalcy of life during those five days. So from the first experience, women feel that period is something they should hide. So you know where we should start from.

PadMan is slated to release on February 9. It is directed by R. Balki and also stars Radhika Apte as Padman’s wife, Sonam Kapoor as a person who helps Padman in his venture.