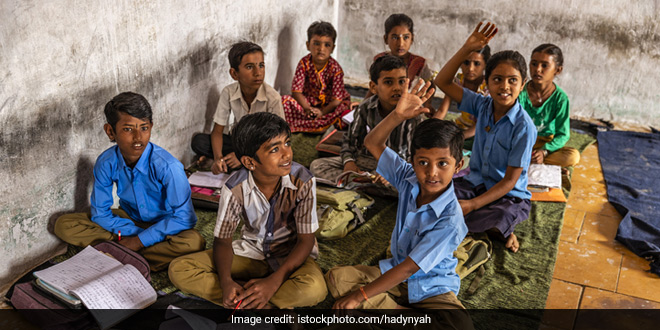 New Delhi: 14-year-old Kajal from South Delhi Municipal Corporation School in New Delhi’s Raghubir Nagar says, “Earlier, when I used to get my periods, i was forced to sit at home as my school didn’t have a separate toilet facility for girls. Sometimes, I missed school for 10 straight days. It impacted my studies so much that I had to skip a year.” Kajal is not alone, there are many students like her who were forced to quit school because of lack of access to basic hygiene facilities.

WASH programme in school combines components like building toilet, drinking facilities, inclusion of WASH curriculum in school, which covers basics of handwashing, personal hygiene and more. These are necessary to produce a healthy school environment and to develop or support appropriate health and hygiene behaviours.

The Rapid Survey on Children in 2013-14 before Swachh Bharat Mission was adopted in India stated that nearly 22 per cent of schools in the country, did not have appropriate toilets for girls and 58 per cent of the pre-schools had no toilet at all. However, the launch of Swachh Bharat Mission in 2014, Swachh Bharat: Swachh Vidyalaya (SBSV) initiative in 2015 aimed at providing universal access to sex-segregated toilets in all 1.2 million government schools and increased the policy emphasis on school sanitation through WASH programmes. These interventions helped turn things around.

In Pics: Handwashing, A Vital Defense Against COVID-19, But Billions Don’t Have Water To Wash Hands

How Intervention Of WASH Programmes In Schools Changed Lives Of Children?

Highlighting how the WASH programme intervention changed her life, Kajal who was one of the beneficiaries added,

In 2019 things took a 360-degree turn for me. My school adopted the WASH curriculum as a part of Swachh Bharat: Swachh Vidyalaya initiative and girls got access to a separate toilet along with basic menstrual hygiene facility like sanitary napkins, dustbins and incinerators. Since that very day, I have not missed a single school day.

According to a Drinking Water, Sanitation and Hygiene in Schools: 2018 Global Baseline Report, Indian schools reached near 100% sanitation from 50% in just a decade. The report which reviewed the progress of implementation of WASH programmes in the country said, “Indian schools achieved a major feat as almost all schools in the country had some type of sanitation facility in 2016, as compared to half the schools in India reported having no sanitation facility at all just a decade ago.”

Also Read: Five Diseases India Can Stamp Out By Focusing On Handwashing

The latest report by the WHO/UNICEF Joint Monitoring Programme for Water Supply, Sanitation and Hygiene (JMP) on WASH in schools’ states that between 2000 and 2016, the proportion of schools without any sanitation facility decreased in India. It further stated that the trend in India estimates that almost all schools in the country had some type of sanitation facility in 2016, while 10 years earlier half the schools in India reported having no sanitation facility at all. It also highlighted that between 2000 and 2016, the number of school-age children in India increased from 352 million to 378 million.

Highlighting the health outcomes of inclusion of proper WASH arrangements in schools, a study carried out in Kerala in collaboration with UNICEF revealed that after WASH programme intervention in schools, regularity in attendance increased with children no longer feeling the need to go home in case they needed to defecate. Girls reported significantly fewer problems while on their periods (when compared to schools in the control group that had no WASH facilities); and children were better informed about the importance of hand washing and sanitation. In fact, the study reported that “95% or more of children report handwashing before eating in intervention schools and 61% in control schools (Schools dependent on the financial support of the local education authority )”. Studies also show that WASH in schools helps in curbing incidences of diarrhoea, soil-transmitted helminths, acute respiratory infections, and other WASH related diseases in children.

Sharing his side of story and how the implementation of WASH programme in his school saved his life, Sarfaraz, 12-year-old, from Ghaushabad Primary School, Varanasi said,

Two years ago, when all my friends were going to school and playing outside their houses, I was confined to home battling chronic diarrhoea. Most of the days, I complained of stomach ache, vomiting, loose motions. Mostly, I attended school for 10 days a month.

He further said that while I was grappling with poor health, my school adopted a WASH programme. He added,

Courtesy WASH programme, my school started providing safe drinking water, there was good sanitation facilities and I learnt basic hygiene habits. I started washing hands after using a toilet and before eating food. I learnt, wearing slippers was an important part of maintaining good hygiene. After sustaining these practices for few months, my health started showing a positive effect. My visits to the doctor decreased and days in school increased.

Estimating that millions of school children are being benefited by WASH programmes in India, the WaterAid school WASH Research: India Country Report states that “Handwashing with soap is making a remarkable breakthrough as a part of WASH Programmes, which is now being mainstreamed as a requirement of the nationwide midday meal scheme, which benefits nearly 110 million children in 1.3 million primary and upper primary schools.”

Highlighting the importance of WASH programmes, Neeraj Jain, Country Director, Program for Appropriate Technology in Health (PATH), India, said there is a need to look at preventive and curative measures, where preventive is appropriate WASH (Water, Sanitation and Hygiene) practices and curative is access to health services. He added,

Diseases spread due to bad hygiene and environment. We are a large country where scalable solutions are critical for the success of a public health programme. We are witnessing large-scale funding in healthcare, and we need to align WASH under the health priorities of the country.

Madhu Krishna, Deputy Director, Bill and Melinda Gates Foundation-India, said “WASH programmes, wherein safe and sustainable sanitation along with hygiene is provided is like vaccination and the need for it is growing.”

Nutrition program and WASH programs have long been implemented as parallel interventions in the country. The Swachh Bharat Mission through the Swachh Vidyalaya Abhiyan in schools changed the narrative and brought attention to sanitation, drinking water and handwashing in educational institutions, and incorporated hygiene education into the curriculum. Though many schools in rural and urban India now have gender-segregated toilets with bright wall paintings and posters on toilet use and handwashing steps. Yet, while handwashing stations may exist, they often lack water and soap, undermining actual practice of this health-promoting habit. The POSHAN Abhiyan for nutrition brings renewed attention to hygiene behaviors, including handwashing. Still, many anganwadis in rural and urban India, do not have sufficient water and soap, let alone a designated handwashing space. This highlights the need of proper implementation of such schemes and future investments, which can then meaningfully improve the health and wellbeing of children and ensure successful outcomes.

The same challenge of services being available up and running was highlighted in the recent Comptroller and Auditor General of India (CAG) audit survey of toilets constructed in schools by Central Public Sector Enterprises (CPSEs). The survey revealed that 30 per cent of the toilets constructed in India were not in use due to various reasons like lack of cleaning and running water facility. The survey also revealed that wash basin or hand wash facility was not available in 1,279 (55 per cent) out of 2,326 toilets surveyed.

Also Read: #SwasthBharat: Hand Hygiene – Why, How & When. A Quick Guide

V R Raman, Head of Policy at WaterAid India, said that the quality issues and other concerns raised by the CAG are definitely worrisome, but it also raises a doubt on preparedness of opening up of schools while we deal with COVID-19 pandemic. Mr Raman said,

CAG report can build national attention to a much important issue, and it will be useful if this attention is able to catalyse the much-needed change in the situation, in terms of ensuring safe, accessible and quality sanitation facilities in all institutional premises, addressing the needs of all genders and specific vulnerable groups. In fact, the reopening of schools during COVID-19 requires much more facilities than in the ordinary situation.

Further talking about the target of SVA (Swachhh Vidyalaya Abhiyan) and the ground reality where 11 per cent of the toilets surveyed were either non-existent or partially constructed, Mr Raman said,

The ongoing phase 2 of the Swachh Bharat Mission should prioritise this issue in a systematic manner and build a focussed approach towards achieving necessary WASH standards in the schools and institutional premises. We need to keep in mind that we have to also build pandemic as well as disaster resilience in these institutional spaces.