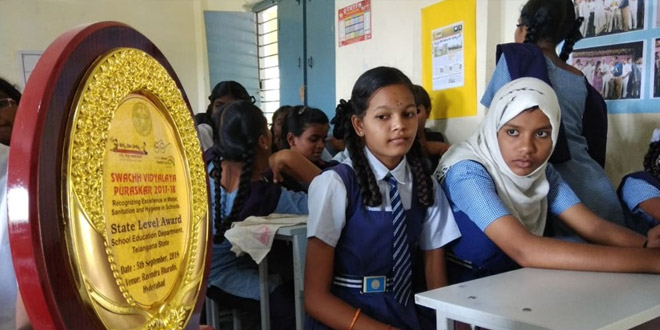 New Delhi: “Akkad-bakkad-bambe-bo, sabse pehle hath dho.” A popular household game given a swachh twist by students of Arya School in Hyderabad. Literally translated it means, ‘First and foremost, wash your hands.’ Recited by students during the 12-hour-live Cleanathon for the NDTV Banega Swachh India Campaign, it highlights the importance of washing hands.  The school was awarded the state’s Swachh Vidyalaya Award for their initiatives and efforts to make their school clean and hygienic for children. The award, launched as a follow up to the Swachh Vidyalaya Initiative started in 2014 by the Ministry of Human Resource Development, aims to bring about a positive behavioural change in the society and is awarded to the schools that have done impeccable work in the field of water, sanitation and hygiene (WASH).

Arya School’s story of transformation is conveyed by the students on what they have learnt about sanitation and hygiene and the positive impact it has had on their lives.

A student told NDTV, There used to be just one tap for the entire school to wash our hands from, and we had to use our water bottles for the same, but after the program, our school has adequate the hand wash facility.

Another girl said, “I told my uncle that I will not visit his house until he builds a toilet.”

These small but significant changes are not just at the individual level of students it has also helped the school.

One of the students said, “In the last 3 years, school enrolment has increased and so has the attendance. What used to be a class of 30 students is now proudly a class of 79 students. The pass percentage has also improved from 32 per cent to 100 per cent.”

Apart from WASH, the school has also taken steps to improve menstrual hygiene. The result is that girls are now using sanitary pads instead of cloth pads. Menstrual hygiene is an important aspect in terms of hygiene and sanitation for the school as in sheer numbers there are more girls than boys. This has resulted in a prominent reduction in dropout rates of children, especially girls. For their noteworthy efforts, the school was given Certificate of Recognition along with an additional grant of Rs.50,000 as part of the award.