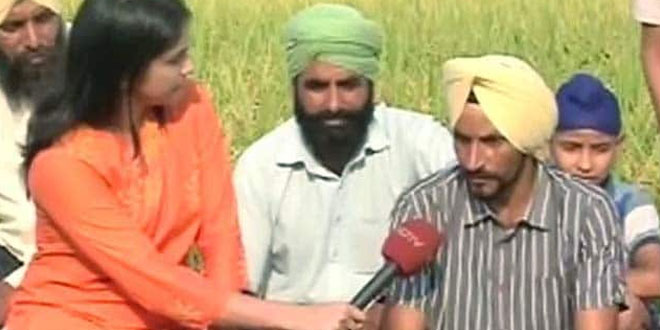 New Delhi: North India’s annual air pollution emergency is blamed on the farmers in Punjab and Haryana burning their paddy straw. Both Centre and State government have left no stone unturned in making sure they learn about suitable alternatives to avoid this process. Government has even started awareness programs teaching the farmers about the threats of stubble burning on the environment as well as health. Yet, majority of the farmers in the state of Punjab stick to the practice of stubble burning, as it is the cheapest option for them.

However, there is an innovative group of farmers who realised that stubble burning has to be the last resort for managing the crop residue. Jasbir Singh and his friends from Shehzada Kalan village in Gurdaspur district have not burned their farm waste from past ten years.

Jasbir Singh explained that ten years ago, there wasn’t much talk about the farm fires resulting in the deterioration of the air quality in Delhi but he got the motivation to stop stubble burning from his morning prayer which says “Pavan Guroo Paanee Pithaa, Maatha Dhharath Mehathh” which literally means – “Air is the lord, water is the father and earth is the great mother of all”

Mr. Jasbir elaborated that at first he thought of maintaining clean air and the possibility of saving water. He asserted that if the farms are not set on fire, the quality and fertility of soil improves. Jasbir Singh and his group use a machine called Happy Seeder which can plant the wheat seed without getting jammed by the rice straw.

The Happy Seeder is a tractor-mounted machine that cuts and lifts rice straw, sows wheat into the bare soil, and deposits the straw over the sown area as mulch. This technology is environment friendly, good for the health of soil and saves water.

Initially, when they switched to technology for managing the farm waste, the group faced a lot of backlash amongst their community, for not following the common practice, yet they were committed to save the environment. They have vowed to never burn stubble and switch to technology for safe disposal of crop residue.

Kunal Sharma, Director of Programs at The Nature Conservancy (TNC) India, explained that any effort at this point in time to save the air quality in North India should be considered significant.

Delhi has a lot of sources of air pollution. As gradually more and more farmers adopt the technology and avoid burning their farm residue, naturally, the amount of pollution entering the Delhi air-shed will go down.

Right now, according to estimates, 25 per cent of the air pollution in Delhi during the winter is from agriculture residue burning and according to Mr. Sharma, if this 25 per cent is cut out through such technology, it could result in a larger difference.