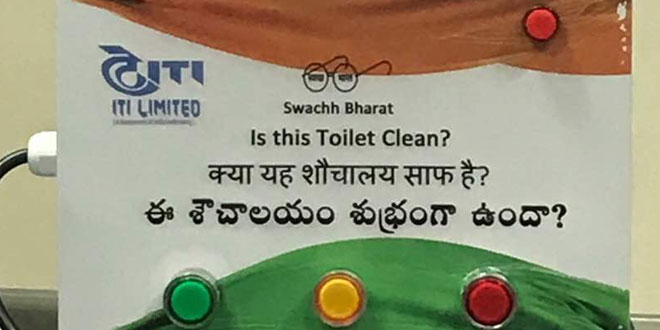 New Delhi: Now, improving cleanliness in Hyderabad’s public toilets is just a button away! In a few days from now, if you are a Hyderabad resident wanting to raise the issue of unsanitary conditions in a public toilet, you will no longer have to waste your time in following the long documentation process or visiting the municipal corporation. The Greater Hyderabad Municipal Corporation (GMC) will confer upon its citizens the power to vote on cleanliness levels at pay-and-use and free toilets.

As part of the one month pilot project started by the civic body, the voting machines also known as ‘censor boards’ will be installed across 50 public toilets across the city in the next 10-15 days, “Based on the success rate of these voting machines, other 350 public toilets will also get this system,” said Hari Chandana Dasari, West Zone Commissioner, GMC.

The systems which are bought at Rs 945 per machine with maintenance of three years will have three buttons. Press the red button if the toilet conditions are very poor and unhyienic, orange for average maintenance and green if cleanliness is maintained in the toilet. The censor board will be installed in IT corridors of Serilingampally, Kukatpally, Moosapet, Chanda Nagar and Patancherruvu.

The voting machines will be linked to the centralised system and at the end of the day results will be sent across to a dedicated dashboard in the GMC office. Anyone from an assistant engineer, zonal officers to deputy commissioners will have access to the feedback result.  “Mostly we will issue payment cuts and in extreme cases, the contracts will be terminated,” said Ms Dasari.

In past few months, the GMC received several complaints with regard to maintenance of public toilets especially from women said Ms Dasari, Though we had increased the surveillance of municipal workers at public toilets, it was becoming difficult to daily keep a track on so many toilets. Hence the civic body decided to come with a monitoring mechanism and what better than voting machines.

At present, the contractors are supposed to clean the toilets thrice a day. But looking at the scenario it is unlikely that the cleaning even takes place. The new move will not only ensure hyiene factors at public toilets but also act as a check and balance on the contractors, “Despite charging Rs 2-3 at pay-and-use toilets, the contractors are unable to maintain sanitation standards. This mechanism will act as monitor for contractors to maintain the required standards,” added Ms Dasari.

To help India end the practice of open defecation, government introduced toilet apps where an individual can locate its nearest toilet. Once the polling machines are in place across 400 public toilets, the GMC plans on linking the results of censor boards with the toilet app, “This will help people in not only finding a toilet nearest to him/her but also a one which is in a clean and hyienic condition,” concluded Ms Dasari.