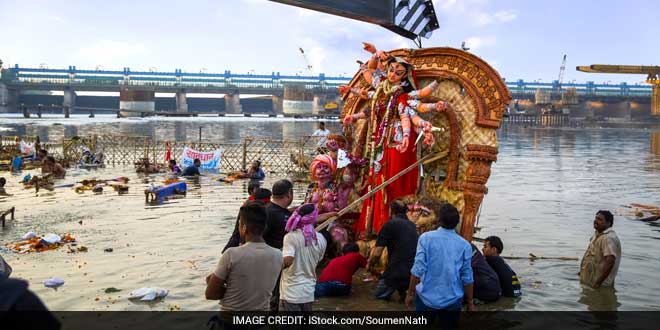 Patna: The immersion of hundreds of idols of Goddess Durga in the Ganga River here and other parts of Bihar, disregarding the Bihar State Pollution Control Board’s appeal and is set to increase the pollution level in the river, officials said on Wednesday.

“But people have mindlessly disregarded the appeal, which will certainly increase pollution levels in the river,” a board official said.

Guddu Baba, who leads a movement to clean the river, said that brightly decorated idols accompanied with metal ornaments and plastic weapons were being ritualistically immersed in the river this year again with no thought for environment.

“The Ganga is peoples’ river, it should be protected by them only,” Guddu Baba added.

R.K. Sinha, a reputed expert on dolphins, said immersing idols, which contain large amounts of non-biodegradable material, is bound to affect the aquatic life of the river.

“Sadly, hundreds of idols are immersed without bothering about environmental threats. The authorities should create awareness of the need to immerse the idols elsewhere to save the river from more pollution,” he said.

Green activists estimated that more than 5,000 idols of Goddess Durga were immersed in the river across Bihar.

“Idols immersed in the Ganga will add pollution and it is not going to help ongoing hype over cleaning of the river by the central government,” said Ranjeev, a river and flood expert.

Several studies conducted by the Central Pollution Control Board show that idol immersion during Durga Puja is putting “significant stress” (pollution) on the rivers, lakes and local ponds.

Plaster of Paris does not get dissolved or disintegrated fast and contains gypsum, sulphur, phosphorus and magnesium. The chemical dyes and paints being used to colour the idols contain poisonous elements like mercury, zinc oxide, chromium and lead, the potential causes of developing cancer.

The immersion of these idols poisons the waters of lakes, rivers and the sea by increasing acidity and the content of heavy metals.

Cities To Be Open Defecation Free By 2017: Maharashtra Chief Minister