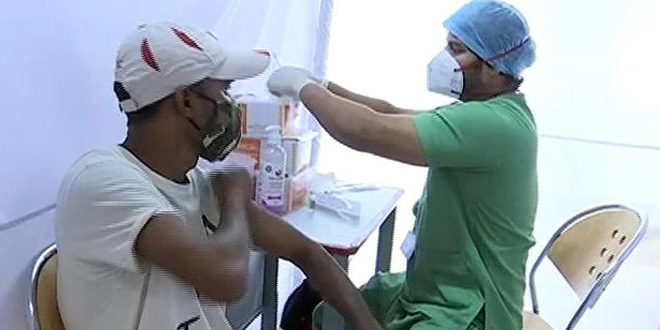 New Delhi: In its sixth month of the COVID-19 vaccination drive, India surpassed the United State of America (USA) in terms of total vaccination doses administered so far, said the Ministry of Health and Family Welfare (MoHFW) on June 28. The Ministry added that while USA started vaccinating against COVID-19 from December 14, 2020, the drive was launched in India, more than a month later, on January 16, 2021. Here is a snapshot of how vaccination drive is going on in the country.

The Union Health Ministry stated that a total of over 35.12 crore vaccine doses have been administered, as of July 4. These include 28.66 crore people who have been given the first dose and 6.39 crore people who have received both doses. This implies that about 5.11 per cent of the total population of over 125 crore people, as per the Population Census, 2011 is fully vaccinated. While this is less than the US’s over 45 per cent of the population fully vaccinated, in absolute numbers, India nudged past USA’s 33.06 crore administered doses.

Globally, currently China, with over 130.5 crore doses administered, is ahead of all other countries. Brazil which stands on the fourth position, immediately after USA, has administered only 10.5 crore doses while the United Kingdom has given only 7.8 crore jabs so far.

Break Up Of Doses Administered In India

Out of the total doses administered from May 1 to June 24, 56 per cent were given in the rural areas (9.72 crore) and 44 per cent (7.68 crore) were given in urban areas, according to the Union Health Ministry.

The government data shows a gender divide in vaccination done. Out of the total jabs given so far, only 16.3 crore or 46 per cent were administered on females, while about 18.9 crore or 54 per cent on males.

Commenting on the difference of 8 per cent in vaccination among women and men, Dr VK Paul, Chief, COVID Task Force and member (health) of NITI Aayog said,

The gender imbalance needs to be corrected in the days ahead. Where this imbalance exists, it has to be addressed and we have to make it easier for women to access vaccines and this is a lesson for the future.

The government data also shows that out of the more than 4 lakh (4,87,803) transgender people, as per the Population Census 2011, only 60,544 people have received at least one dose of COVID-19 vaccine.

The Union Health Ministry’s data show that the average daily vaccination doses administered in the month of June was 40.35 lakh doses per day, which is up from 19.69 lakh per day in May.

The pace of vaccination, as per the Union Health Ministry has picked up after the new COVID-19 vaccination policy came into effect on June 21 under which the Union Government is supplying 75 per cent of the procured doses free-of-cost to States and Union Territories to inoculate everyone for free who is above 18 years of age. Private hospitals have access to the remaining 25 per cent for which citizens have to pay. A price cap of Rs. 150 as service charge over and above the price of the vaccine has been imposed for private hospitals. At private hospitals, a single dose of Covishield costs Rs. 780, Covaxin is priced at Rs. 1,410 per dose and Sputnik V’s single dose costs Rs. 1,145. The country has got its fourth vaccine as the Drugs Controller General of India (DGCI) granted permission to the Mumbai-based pharmaceutical company Cipla to import Moderna’s COVID-19 vaccine for emergency use.

COVID-19: Pregnant And Thinking Of Getting Vaccinated? Here’s What Government Guidelines Say About Safety, Side-Effects

India To Make CoWin Available To All Countries: PM Modi