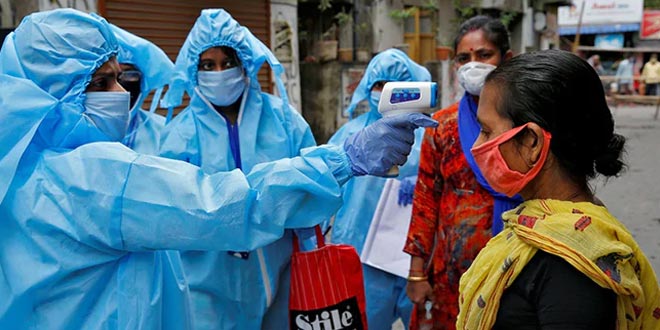 New Delhi: With calibrated measures and focussed strategy of the Centre along with the states and UTs, India has sustained its global position of recording one of the lowest COVID-19 cases as well as deaths per million population, the Union health ministry said on Wednesday. While the global figure for COVID-19 cases per million is 5,552, India is reporting 5,790 cases per million population. USA, Brazil, France, UK, Russia and South Africa are witnessing much higher numbers.

The COVID-19 deaths per million population in India is 87, substantially lower than the world average of 148. India’s targeted strategies in COVID-19 management and the proactive as well as calibrated public health response over the last several months have resulted in such encouraging outcomes, the ministry underlined.

In the matter of total tests conducted, India is one of the topmost countries. With 10,66,786 tests in a span of 24 hours, the cumulative number of tests conducted has crossed 10.5 crore, the ministry said.

Widespread and comprehensive testing on a sustained basis have aided the early identification and timely effective treatment which has resulted in higher recoveries and lower fatality rate, it said. The country’s Case Fatality Rate at present is 1.50 per cent. India continues to report a trend of steadily decreasing active cases. Presently, the active cases (6,10,803) comprise merely 7.64 per cent of the total cases in the country. The total number of recovered cases are 72,59,509.

Also Read: COVID Warrior Travels From Vishakhapatnam To Mumbai With Her Newborn To Contribute To The Fight Against COVID-19

A total of 43,893 new cases have been registered in a span 24 hours in the country, whereas 58,439 recoveries were reported during the same period, with 77 per cent of the recovered cases reported from 10 states and Union territories (UTs), the ministry said. Maharashtra, Karnataka and Kerala have contributed more than 7,000 cases to the single-day recoveries.

Seventy-nine per cent of the new infections are from 10 states and UTs. Kerala has overtaken Maharashtra with the highest number of fresh cases. Both states, however, are still contributing more than 5,000 new cases, the ministry said.

The states which are reporting a spurt in cases are Delhi, West Bengal, Karnataka, Andhra Pradesh and Tamil Nadu. A total of 508 case fatalities have been reported in a span of 24 hours in the country. Of these, nearly 79 per cent are concentrated in 10 states and UTs, it said. Maharashtra has contributed the maximum to the latest fatalities with 115 deaths. India’s COVID-19 caseload mounted to 79,90,322, with 43,893 new infections being reported in a day, while the death toll climbed to 1,20,010 with 508 new fatalities, the ministry data updated at 8 am on Wednesday showed.