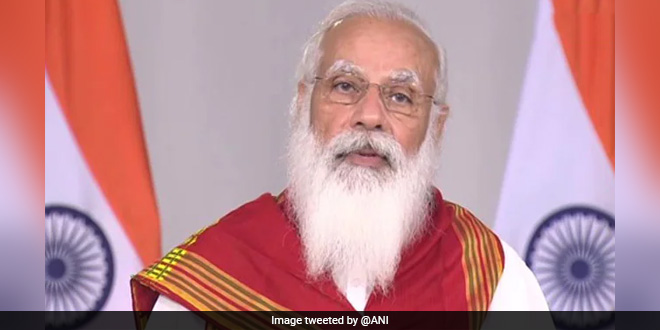 New Delhi: Asserting that India is fighting COVID-19 with all its might, Prime Minister Narendra Modi on Sunday (May 30) spoke to a number of people ranging from those engaged in transporting medical oxygen to lab technician, and said the country’s resolve to prevail over the virus is equal to the magnitude of the challenge it faces. In his monthly Mann ki Baat broadcast, PM Modi noted that the country was also faced with several natural disasters, including cyclones, landslide and earthquakes, during the pandemic, and said more lives were saved than the past with the Centre, states and local administration coming together to carry out relief and rescue operations.

Also Read: India Proud Of Its Scientists Who Worked For Vaccines; We Should Not Lose Sight Of Challenges Like Climate Change: PM Modi

With the demand for medical oxygen rising exponentially during the recent surge in COVID-19 cases and many states and hospitals complaining of its shortage, the prime minister said the production of the liquid medical oxygen (LMO) has risen by over 10 times to nearly 9,500 MT daily from 900 MT earlier.

“The demand for oxygen surged all of a sudden. This was a very big challenge, and delivering medical oxygen to remote parts of the country was indeed a huge task,” he said, noting that many plants manufacturing industrial oxygen were located in the eastern parts of the country and lauded those, including cryogenic tanker drivers, the oxygen express (train) crew and Air Force pilots, involved in its transportation.

In his address, he also praised farmers for generating record produce, and said the agricultural sector protected itself from the adverse effects of the pandemic to a great extent. The farmers produced record output and the government procured a record amount of crops as well, he said, adding that farmers at several places got more than the minimum support price (MSP) for mustard.

Speaking of the arrangements his government made to allow farmers to transport their produce to different markets, PM Modi said “Kisan Rail” has so far ferried nearly 2 lakh tonnes of produce. Now the farmers are able to send fruits, vegetables, grains to other remote parts of the country at a very low cost, he added. Some products are being sent abroad as well, he said and mentioned that jackfruits from Tripura are now being exported to London and so is Bihar’s Shahi Litchi.

In his conversation with people involved in transporting oxygen, PM Modi spoke to Dinesh Upadhyay, who drive oxygen tankers, Shirisha Gajni, a loco pilot of an all-woman crew oxygen express, and Group Captain Patnaik from the Air Force and lauded their service to the nation.

Noting that there was only one coronavirus testing lab in the country initially but today more than 2,500 labs are in operation, PM Modi said more than 20 lakh tests are being carried out in a single day now with over 33 crore samples having been tested in the country so far. The prime minister then spoke to lab technician Prakash Kandpal who shared his experience. PM Modi also asked people to continue to adhere to rules related to wearing masks and taking vaccines, saying there should be no letup in our efforts. “This indeed is the path to our victory,” he said.

COVID-19: ‘Stay Home; If Not, It’ll Be At Your Home’ Reads Graffiti Painted By Hyderabad Artist To Raise Awareness About Lockdown