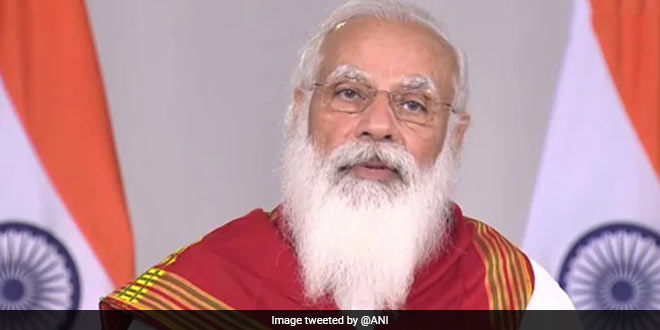 New Delhi: India is the only country in the group of G-20 countries which is moving fast towards achieving its climate goals, Prime minister Narendra Modi said on Sunday (August 15), asserting that it is giving equal emphasis to environmental security as to national security. PM Modi said India has also made a move towards electric mobility and the work on 100 per cent electrification of the railways is also progressing at a fast pace.

Also Read: Independence Day 2021: Indians Have Fought The Battle Against COVID With A Lot Of Patience, Says PM Modi

The Indian Railways has set a target of becoming Net Zero Carbon Emitter by 2030. Along with all these efforts, the country is also emphasising on Mission Circular Economy, he said.

Our Vehicle Scrap Policy is a great example of this. Today, India is the only country in the group of G-20 countries which is moving fast towards achieving its climate goals, the prime minister said in his Independence Day speech at the Red Fort.

India is a vocal voice in the area of environment security, PM Modi stressed.

We are giving equal emphasis to environmental security as to national security. Be it biodiversity or land neutrality, climate change or waste recycling, organic farming, India is progressing in all these sectors. India has increased the forest area or the number of national parks, the number of tigers and the Asiatic lion and it is a matter of happiness for the people. At the same time, one also has to understand another truth that India is not energy independent today, he said.

Also Read: Those Who Get Jabbed Become ‘Baahubali’; Over 40 Crore People Vaccinated Against COVID: PM Modi

He said India spends more than Rs 12 lakh crore annually for energy imports. For the country’s progress, India’s energy independence is the need of the hour, necessary to make a self-reliant India, he said.

Therefore, today India has to make a resolution that we will make the country energy independent before the completion of 100 years of Independence and for this, our road map is very clear. Be it a gas-based economy, a network of CNG, PNG across the country, a target of 20 percent ethanol blending, India is moving ahead with a set goal, he said.

Out of this, the target of 100 GW has been achieved by India ahead of schedule. These efforts are also giving confidence to the world. The formation of the International Solar Alliance is a great example of this. Whatever work India is doing today. There is the biggest goal which is going to give quantum jump to India in the field of climate, that is the area of Green Hydrogen, he pointed out.

To achieve this goal of Green Hydrogen, he also announced the National Hydrogen Mission.

We have to make India a global hub for production and export of Green Hydrogen during the Amrit period. This will make India’s new progress in the field of energy self-reliant and will also become a new inspiration for clean energy transition all over the world. New opportunities from Green Growth to Green Job are knocking today for our start-ups for our youth, PM Modi said India will have to augment both its manufacturing and exports.

He said just a few days ago, India launched its first indigenous Aircraft Carrier INS Vikrant for trial in the sea.

Today India is making its own indigenous fighter aircraft, its own submarine. Gaganyaan is also slated to hoist India’s flag in space. This itself is evidential of our immense capabilities in indigenous manufacturing, he said.

The prime minister said India will further accelerate its efforts towards the Blue Economy.

The Deep Ocean Mission is the result of our ambition to explore the unlimited possibilities of the ocean. The mineral wealth which is hidden in the sea, the thermal energy which is in the sea water, can give new heights to the development of the country, he said.

Independence Day 2021: Indians Have Fought The Battle Against COVID With A Lot Of Patience, Says PM Modi