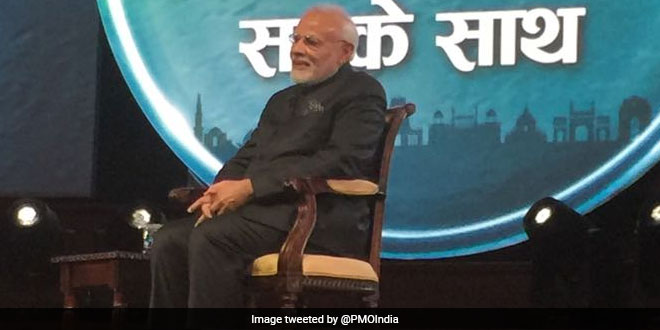 New Delhi: “A small effort from our end can bring significant change towards the country’s development.”

This is how Prime Minister Narendra Modi defined the efforts of millions who have participated in the Swachh Bharat Abhiyan and contributed towards improving India’s sanitation coverage. Speaking at London while attending the Commonwealth Heads of Government meet, the Prime Minister held a session titled ‘Bharat Ki Baat, Sabke Saath’ in which he interacted with the Indian diaspora and discussed India’s social and economic state. PM Modi mentioned the Swachh Bharat Abhiyan, which has been one of the highlights of the present Union government.

During his interaction with Prasoon Joshi, the Prime Minister said that despite so many years of independence, India’s sanitation coverage hovered between 35 to 40 per cent till 2014. Highlighting the plight of the rural poor, PM Modi said that women especially had to bear the brunt of lack of proper sanitation facilities in India. Citing the example of women who had to wake up daily before sunrise to relieve themselves and wait till sunset to do the same, with no way to access toilets in between, he said that the trauma and health complications that generations of women went through due to lack of toilets was unparalleled.

I would often ask myself can’t we make enough toilets to ensure that women in our country lead a life of dignity? This question would not allow me to sleep at night. I realised that building toilets across India will be a gigantic responsibility, but seeing how India responded to my request of building toilets, I am hopeful now, said Prime Minister Narendra Modi.

The Prime Minister also spoke at length how the Swachh Bharat Abhiyan has transitioned from a government initiative to a participatory movement where large scale participation has been witnessed across India. PM Modi said that in a democracy, the more people come together, the more effective social schemes and their results become.

After forming the government, I gave the call to build toilets. Could the government alone have done this? People themselves took up responsibility and work was done, said PM Modi.

More than 6 crore toilets have been built across rural India, under the Swachh Bharat Abhiyan. 3,50,000 villages have been declared open defecation free (ODF) and 371 districts have also earned the ODF distinction. Ever since its inception on October 2, 2014, Prime Minister Narendra Modi has been quite vocal about the Swachh Bharat Abhiyan and has regularly spoken about the sanitation mission in many of his public addresses. Recently, the Prime Minister addressed 20,000 Swachhagrahis in Bihar’s Champaran, stressing on the importance of sanitation and how an ODF country will help fulfill Mahatma Gandhi’s dream of a clean India. The Swachh Bharat Abhiyan has a national deadline of constructing 10 crore toilets by October 2, 2019, of which 6.9 crore have already been built.