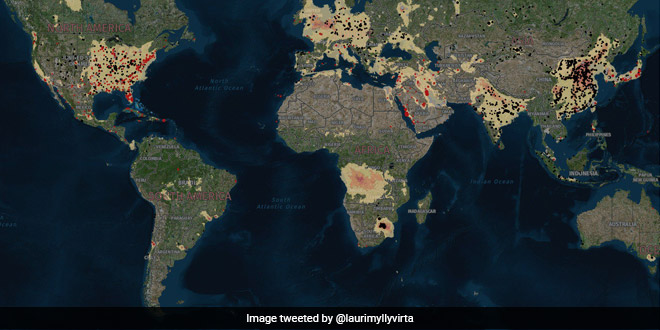 New Delhi: As Delhi continues to battle alarming pollution levels, a new study has found that three of the world’s largest nitrogen dioxide emission hotspots that contribute to formation of finer particulate matter causing air pollution are in India, with one in the Delhi-NCR. The study by Greenpeace comes as Delhi’s pollution level climbed to alarming levels. Air quality continued to remain in the “very poor” category as a thick haze engulfed the city Monday.

NO2 is a dangerous pollutant in itself and also contributes to the formation of PM2.5 and ozone, two of the most dangerous air pollutants. The largest number of hotspots, a total of 10, is found in China, eight in the Arab world, four in the EU and three each in India, the US and the DR Congo, according to an analysis of new satellite data from June 1 to August 31.

Delhi-NCR, Sonbhadra in Uttar Pradesh and Singrauli in Madhya Pradesh and Talcher-Angul in Odisha are the identified hotspots in India. Sonbhadra and Singrauli are considered as part of a single hotspot. “Air pollution is a global health crisis, with up to 95 per cent of the world breathing unsafe air.

With hotspots across six continents, ranging from cities to industrial clusters to agricultural areas, this new analysis shows us more clearly than ever before just how big a part of the picture NO2 pollution is,” Lauri Myllyvirta, Greenpeace Nordic air pollution campaigner, said.

Just as we have nowhere to hide from the dirty air impacting our daily lives, so too do the polluters have nowhere to hide. This new satellite is our ‘eye in the sky’, from which the culprits – coal burning industry and oil guzzling transport – cannot escape. It is now up to governments to act, with all the policy measures and technologies we have at our disposal, to clean up our air and save lives, Mr. Myllyvirta added.

The list of the largest NO2 hotspots in the world from June 1 to August 31 this year includes well known coal-fired power plants in South Africa, Germany and India, and numerous coal-burning industrial clusters in China. Cities such as Santiago de Chile, London, Dubai and Tehran also feature prominently in the list of 50 NO2 hotspots due to transport-related emissions.

There are clear solutions to the global air pollution crisis. First and foremost, with coal the number one source of NO2 emissions, governments need to rapidly move their energy systems away from reliance on coal and towards renewable technologies, the report said.

For those regions and cities whose primary source of air pollution is transportation, comprehensive plans to move away from combustion engine vehicles, particularly diesel, to electric-powered public transport systems will help to provide clean air, it added.

The report also cited a World Health Organisation report which found that over 1 lakh children below the age of five died in India in 2016 due to exposure to toxic air.

THREAD: We have just released an unprecedentedly detailed mapping of NO2 pollution levels around the world, revealing the worst pollution hotspots and showcasing the power of a new generation of smog-tracking satellites. Interactive map: https://t.co/SCD7IPUe50 pic.twitter.com/YcalmdGTKt

Eco-Friendly Firecrackers Exist In India, But Will Not Be Available This Diwali: Union Environment Minister Dr Harsh Vardhan