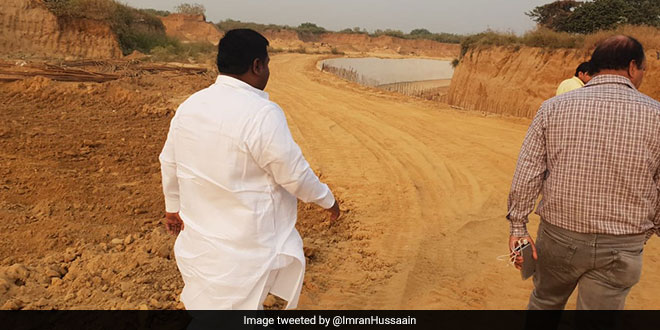 New Delhi: With air quality in Delhi worsening with each passing day and Air Quality Index (AQI) currently at 401 slipping into ‘severe’ category, Delhi Environment Minister Imran Hussain continues his surprise inspection drive at different construction sites in the city. On Tuesday (October 30), Environment Minister conducted a surprise inspection at an under construction underpass in South Delhi’s Mahipalpur area and witnessed clear violation of pollution control norms in the city. Mr Hussain ordered strict action against contractor and imposed a fine of Rs. 5 lakh for not containing dust during construction.

On Monday (October 29) too Mr Hussain went on a surprise inspection at construction sites in B-block Industrial Area in Wazirpur, in South Delhi. On reaching the construction site, the Environment Minister along with his inspection team witnessed glaring instances of industrial waste burning at Delhi Development Authority (DDA) land, contributing to the existing levels of pollution in the city. The environment minister straightaway imposed a fine of Rs. 5 lakh on DDA. Mr Hussain also enquired about rampant dumping and burning of waste on a DDA land and asked Environment Marshals to be deployed, to keep a check on open burning of waste.

The minister has ordered the Delhi Pollution Control Committee (DPCC) to impose a fine of Rs 5 lakh on the Delhi Development Authority (DDA) and the concerned industrial units, the official told IANS.

After inspecting the DDA industrial site, the Environment Minister along with his inspection team headed to an under construction site of a mall behind Netaji Subhash Place metro station in North part of Delhi. On inspection, Mr Hussain found that neither were there any arrangements to sprinkle water for settling fine particles, nor was construction material covered. Mr Hussain immediately ordered strict action against the owner, builder and project proponent for failing to meet pollution control norms.

On October 27, Mr Hussain inspected three ready-mix concrete (RMC) plants in Burari in North Delhi and found all the three plants to be operational. On top of it, measures like sprinkling of water and covering of construction material were not taken to control the emanation of dust. The previous day, Mr Hussain along with his team surprise visited construction sites at Pragati Maidan where a new International Exhibition cum Conventional Centre, Executive Accommodation blocks and a tunnel are being constructed. The minister found similar violationsof air pollution control norms with no arrangements to sprinkle water and construction material left uncovered. The minister immediately asked DPCC to take action against the violators.

As forecasted by Central Pollution Control Board (CPCB), air quality index (AQI) in Delhi has reached ‘severe’ mark. Currently, AQI is at 401 with PM 2.5 and PM 10 being the major pollutant. Along with Delhi, AQI in Ghaziabad, Gurugram, Faridabad, Noida, Hapur, Baghpat and Bulandshahr has also touched severe mark.

India Home To Three Of The Largest NO2 Emission Hotspots: Greenpeace