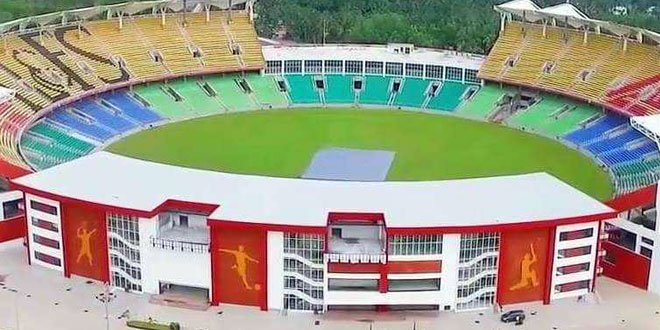 The lush grounds of Greenfield International Stadium at Kariavattom in Thiruvananthapuram, Kerala, is hosting an International T20 cricket match for the first time as India takes on New Zealand on November 7. But as the stadium waits to come alive with crowds cheering the home team, it is also gearing up to ensure that the event is a zero waste affair. Essentially, all efforts are being made to cut down on waste generated during the match and whatever is generated will be recycled instead of being discarded simply like other garbage.

Thiruvananthapuram Municipal Corporation and Kerala Cricket Association have joined hands with a NGO Prakruthi, to make this event a waste free one. To ensure that the event is a zero waste one, Prakruthi members held discussions with the food and beverages vendors scheduled to put up stalls during the match. Pepsi, the official beverage sponsor for the match is using a specific quality of plastic bottles for the match, so that these can later be recycled by the Thiruvananthapuram Municipal Corporation. Snacks and chips packets will also not be sold during the match, as the plastic cover of these food items come in aluminium coating which cannot be recycled. Food items sold during the match will be served on special recyclable plates made out of sugarcane fibre.

Green volunteers from the corporation will indulge in cleaning up the stadium after the match is over. Prakruthi will also run two campaigns on the day of the match. The first one, called ‘My Waste My Responsibility’ will aim to sensitise people about waste management. Separate bins for plastic, paper and wet waste will be available outside the stadium so that spectators can discard waste in a manner that will ensure segregation of waste  on the spot. After that the waste will be taken away by the civic body for recycling. The second campaign called ‘Tree20’ will see the organisation planting 20 trees in and around the stadium premises, in order to make up for the paper tickets sold during the match.

Waste is something people must be sensitised about and an event of such a large scale is the perfect platform for people to be sensitised about waste disposal and recycling, said Anoop Roy, Project Lead of Clean City Thiruvananthapuram, an initiative of the local civic body.

Initially, Prakruthi advocated for a green protocol event, where only eco-friendly materials are used throughout the duration of the event. Since that was not possible due to logistical challenges, Prakruthi and the stakeholders decided to make the event a zero waste one.

Initially we had hoped for a green protocol event, which would have made the match India’s first green protocol cricket match. Since that was not possible due to logistical challenges, we decided to make the event a waste free one, said Divas Sadasivan, member at Prakruthi.

Social events in India which witness the gathering of crowds often end up being a messy affair. As witnessed recently in the match between India and Colombia at the FIFA U-19 World Cup, large number of plastic bottles and waste was found at the Jawahar Lal Nehru Stadium, after the match. The third T20, if successful in going waste free, will serve as a successful example for similar events to follow.

How Kerala Government Is Planning To Eliminate Manual Scavenging