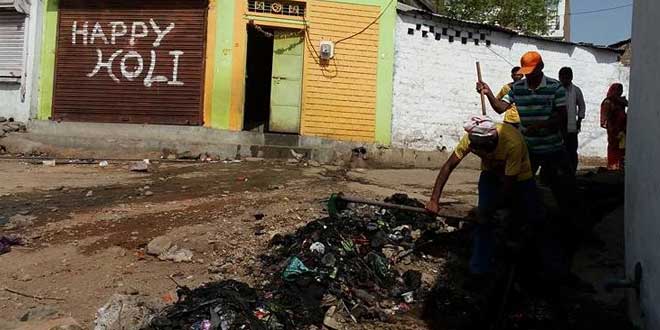 As World Environment Day 2017 approaches, several civic bodies across the country have taken up multiple initiatives to make their cities cleaner and adhere to the beliefs of ensuring a healthy environment for all. Apart from the massive waste management campaign which is scheduled to be launched on June 5 all across India, individual civic bodies are also conducting their own cleanup campaigns to ensure that cities begin to become garbage free. Bhopal, Madhya Pradesh’s capital city has joined the bandwagon and for the past one week, has been conducting several cleanliness initiatives for the city to gear it up for World Environment Day.

Bhopal has already proven its commitment to the Swachh Bharat Abhiyan and ranked 2nd in the Swachh Survekshan 2017, released by the Ministry of Urban Development. Continuing its good work in keeping a check on waste generation, as well as creating awareness among the population on cleanliness and waste management, the Bhopal Municipal Corporation (BMC) has undertaken multiple drives in the past week.

A drive was conducted by Bhopal Municipal Corporation to confiscate plastic bags from commercial areas in Bhopal.#MyCleanIndia pic.twitter.com/ldIDgoDUqm

The Swachh Bharat Abhiyan has rightly stressed in the proper functioning of drainage systems in urban areas. Bhopal achieved its position in the Swachh Bharat Abhiyan due to regular cleaning of the city’s drains and kept up with its good work ever since. The drains in several zones of Ajaynagar and Shahpura were cleaned up on May 28, using drain cleaning vehicles belonging to the civic body, to ensure smooth flow of sewage through the city’s drains and removal of clogging materials.

Cleanliness Drive of Nullah under SBM by BMC at Zone-3 on 28th May 2017 pic.twitter.com/w4F1cYLBHH

Considering Bhopal’s rich history and abundance of iconic historical places, the BMC also initiated a cleanup drive at some of Bhopal’s historic monuments on May 28. Historic monuments such as the Bhojeswar temple were cleaned using hosepipes to cleanse them of accumulated dirt. The civic body plans to conduct regular cleanup drives in many of Bhopal’s iconic places to ensure that visitors have a clean and memorable visit.

Swachh Survekshan 2017 ranked cities based on their focus on promoting awareness among people and Bhopal has upheld its position as the 2nd most clean city in terms of promoting awareness. From 23rd to 25th May, the BMC in association with the NGO Sanidhya Samiti organised a ‘Swachhta Ki Pathshala’ which focused exclusively on cleanliness practices. Children from the slums of Suraj Nagar were taught extensively about waste segregation, self-hygiene and were trained to perform ‘Roko Toko,’ an act where children use whistles to stop people from defecating in the open. They were also provided with caps and whistles for them to make it easier in their participation in ‘Roko-Toko.’

The Bhopal Municipal Corporation has adopted the slogan ‘Humara Prann-Bhopal No.1’ (Our Pledge-Bhopal No.1) as their official slogan so that the civic body is motivated to improve their ranking and secure the top position among clean cities next year. The initiatives undertaken by the BMC while World Environment Day approaches highlight the overall focus of the civic body, ranging from ensuring smooth flow of sewage to spreading necessary awareness.

Our focus is to keep the environment clean by keeping the surroundings clean. We have adopted a multi-focus approach to address all aspects of the city’s cleanliness, from garbage collection to flow of sewage. We will continue with such drives on Environment Day so that every aspect of cleanliness is covered, said Sudha Bhargava, Deputy Commissioner, Bhopal Municipal Corporation.

A Distressing Situation: How Sanitation and Water Problems Are Degrading India’s Environment