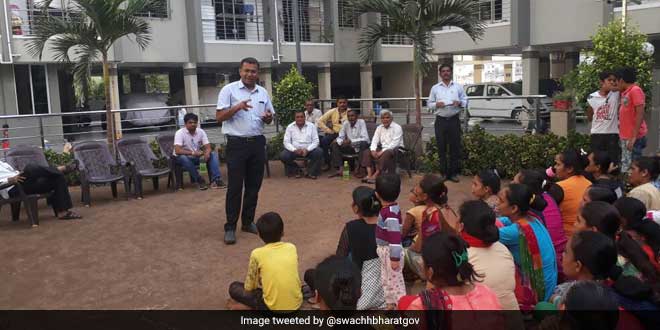 Taking forward Prime Minister Narendra Modi’s message on waste segregation, the Surat Municipal Corporation (SMC) will conduct rallies and go from door-to-door on World Environment Day to educate its residents about how to segregate dry and wet waste. The economic capital of Gujarat will hold its first 2-kilometre rally on June 5 where 2,000 citizens are expected to take the Swachhta pledge. The move comes in after Prime Minister Modi announced a “massive” cleanliness drive in 4,000 cities of India to implement the practice of segregating waste at source.

The local corporators will felicitate housing societies and Safai Karmacharis from city’s seven wards under the ‘100 per cent waste segregation at source category’. Under the same programme the officials will conduct a symbolic distribution of green and blue dustbins across the city.

As part of the World Environment Day programme, the SMC officials will also go from door-to-door and conduct society group meetings to aimed at changing attitudes towards waste management. Experts from solid waste, environment and health department will also accompany these officials to inform people about the disadvantages of not segregating waste.

Facts about landfill contamination, environmental effects due to rising waste generation and other health issues will be explained to people to make them aware about the severity of waste management problems, adds Mr Naik.

The Diamond city is thus focusing on ‘Information, Education, Awareness’ mantra to teach the simple act of waste segregation.

Behavourial change is the biggest problem our city faces when it comes to waste management. For years they have been mixing all kinds of waste as the onus of segregation is on municipal workers. Implementing this new change is not a one day process, says Mr Naik.

Targeting the most important section of the society – students – the SMC will conduct waste segregation sessions in all schools and colleges. Hinting towards a silent competition among the young generation, Mr Naik said certificates will be given to educational institutions which practice 100 per cent waste segregation. The SMC will also distribute green and blue dustbins once the educational institutes open after the summer break.

When asked if Surat, being the fourth cleanest city of India according the recent Swachh Survekshan results, can achieve 100 per cent waste segregation at source Mr Naik says, “Yes, definitely. At municipal level we have effectively implemented waste segregation and with proper dustbin facility, waste segregation guidelines and a little effort from the citizens we can achieve this target at household levels by October 2.”

Surat, which generates 1,800 tonnes of waste per day, will soon implement a law to implement waste segregation at source, From next month onwards, the SMC will discontinue to collect waste from households if it is not segregated into dry and wet waste, confirmed Mr Naik.

As per the Solid Waste Management Rules 2016, it is mandatory to segregate waste at household levels. However people still do not know what waste to put where. Lack of proper guidance combined with non-uniformity in colour codes of these bins across the country has made waste generation a severe issue in India.

With 3 million truckloads of garbage disposed by municipal bodies daily only 30 per cent of it get treated. If India continues to deal generate waste at this rate it is estimated that by 2030, the country will need a landfill size of Bengaluru to dump its waste. Hence to address the crisis the awareness, education and training to segregate waste is the need of the hour.