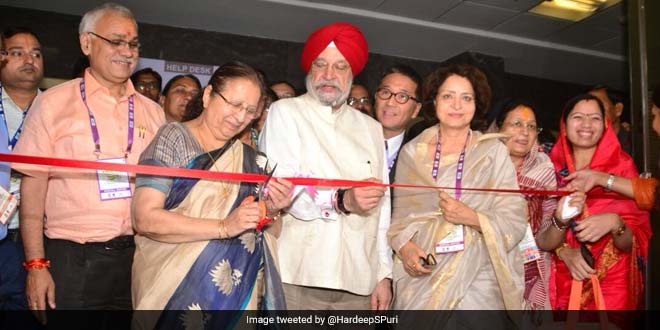 New Delhi: For a country that produces more than 1.5 lakh tonnes of solid waste daily, scientific interventions are a must to manage such gargantuan proportions of garbage, without which India may soon become a country dotted with landfills. Union Minister for Housing and Urban Affairs Hardeep Singh Puri said that India’s capacity to treat its waste scientifically will increase in future. Waste management in India is still majorly restricted to traditional methods of waste collecting and disposing it in landfills, with minimal segregation. The launch of the Swachh Bharat Abhiyan in 2014 has led to some degree of sensitisation and awareness campaigns on waste management, resulting in segregation and recycling being adopted across several cities and towns in India.

At the inaugural session of the eighth Regional 3R (Reduce, Reuse and Recycle) Forum meet in Asia and the Pacific being held at Indore, Union Minister Hardeep Singh Puri said that scientific methods of waste management will become the norm in India in coming days. A mere 25 per cent of India’s waste is currently disposed scientifically, said the Union Minister. At the presence of Tadahiko Ito, Environment Minister of Japan, Mr Puri said that Japan’s progress in managing waste scientifically has been exemplary and India will look forward to Japan’s help in implementing scientific methods of waste management. Japan has implemented a successful waste management system developed on the principles of reusing and recycling, scientifically managing nearly 50 million tonnes of waste per year.

Speaking about scientific waste management the Union Minister said India would be in a much better position to manage waste scientifically in coming years as people have already started to manage waste much better than even a decade back. The country was making significant strides to turn solid waste into manure for biogas generation. Praising Indore, which ranked as India’s cleanest city in Swachh Survekshan 2017, Mr Puri said that it was the citizens who made this feat possible. Sumitra Mahajan, Speaker of Lok Sabha was also present at the inaugural event and said that Indore’s cleanliness was one of the finest examples of public-private partnership between municipal authorities and the citizens, resulting in the city’s cleanliness.

India is aware of the challenges in achieving cleanliness. The country would play a significant role in achieving sustainable development goals, said Mr Puri.

Over 300 representatives from 41 countries will be participating in the 3R forum, discussing on international cooperation on waste management initiatives. The Forum is expected to generate ideas on how waste could be utilised and more revenue generated from implementing scientific waste management techniques.