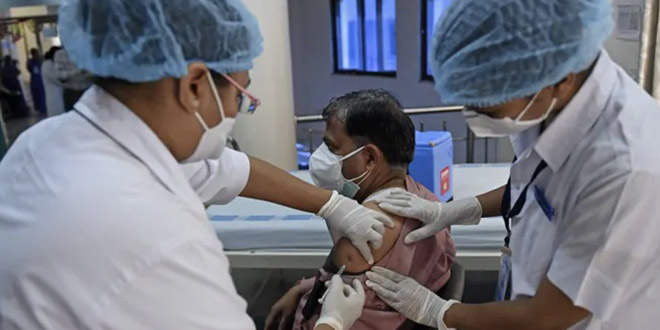 New Delhi: India’s COVID-19 vaccination drive which is being called the world’s largest vaccination drive was kicked off on January 16 by Prime Minister Narendra Modi. According to the data shared by the Ministry of Health and Family Welfare (MoHFW), over 3.81 lakh (3,81,305) beneficiaries have been vaccinated against the COVID-19 as on January 18 (5 PM). On the third day (January 18), over 7,700 sessions were held across India and 1.48 lakh (1,48,266) health and frontline workers were vaccinated. In a media briefing, MoHFW also informed that 580 Adverse Event Following Immunisation (AEFIs) have been reported of which seven have been hospitalised. Though the vaccination has begun in India, the turnout seems to be low in various parts of the country.

Also Read: COVID-19 Vaccine Rollout: What Were The Learnings From Day 1 and 2 Of Vaccination Drive, An Expert Explains

On the first day of the immunisation campaign, the government had aimed to vaccinate over 3 lakh people across over 3,000 (3,006) sites in the country but by the end of the day, 1.91 lakh were inoculated. If we look at the data of the national capital Delhi, a total of 4,319 (53 per cent) health workers against a target of 8,100 were administered the vaccines at 81 centres across the city on the first day.

There was some hesitancy. Some of the people wanted to observe other people who have got the vaccine and see if there are any side effects. We cannot force anyone to come.

As reported by a news agency PTI, a senior Delhi government official has said that the government will hold counselling sessions to create awareness so that apprehensions of the health workers could be allayed.

They will also be called on phones to seek their confirmation and also to encourage them to come forward for taking the vaccines, a senior Delhi government official said.

Delhi Health Minister Satyendar Jain on Sunday (January 17) had said that a trend of 50 per cent of the target beneficiaries receiving vaccine is being seen across India. When asked about the reason behind it, Mr Jain said,

In every place, the figure is close to half. Everywhere it has to be the same reason. There can’t be a different reason for different places. Some people did not turn up for coronavirus vaccination at the last moment.

NDTV also spoke to Dr S.K. Sarin, Director, Institute of Liver and Biliary Sciences (I.L.B.S.) in Delhi. Dr Sarin is of the opinion that the percentage of people being vaccinated is encouraging when compared to other countries like the United States (U.S.). He said,

The US had planned that by January 7 they would be vaccinating 17.5 million and they ended up by 5.1 million; this is less than one-third of the target. I don’t think India is doing badly. If you are doing 70 per cent of the anticipated, I don’t think it is bad. Yes, I do agree that if it was 100 per cent, all of us would have said, what a great country, what a great community, what a great drive. So, I am not disappointed with that.

Dr Sarin added that one of the reasons behind low turnout is some kind of mixed feelings between healthcare workers, who have been on the frontlines and waging a war against the COVID-19 pandemic. Dr Sarin noted that there could be feelings about the type of vaccine, or the dosage or the side-effect and added,

Further talking about what can be done to instil a sense of confidence among health workers and the rest of the citizens, Dr Sarin suggested setting higher targets and said,

We all have a mental block that nothing can go over 100 per cent. Why can’t people overshoot their targets? Give them a target of 125 per cent. Those who were coming tomorrow or day after can be called early. The problem is we don’t have that mindset. Give that mindset that yes we can complete it faster than the fastest.

Dr Sarin also alerted that low turnout can result in wastage of doses. Under the emergency use, India has approved two COVID-19 vaccines – Oxford-AstraZeneca’s Covishield which is being manufactured by the Serum of Institute of India in Pune and Covaxin jointly developed by Bharat Biotech and the Indian Council of Medical Research. While one Covishield vial contains 10 doses, each Covaxin vial has 20 doses. According to the government, once open, a vial has to be used within four hours.

Explaining how a low turnout can result in the wastage of doses, Dr Sarin said,

If a vial is open and you have used only two doses in 4 hours, the remaining eight doses will get wasted.

In addition to this, Dr Shekhar C Mande, Director General, Council of Scientific & Industrial Research (CSIR) said that we have to manage infodemic as well.

While talking to NDTV, Professor Vijay Raghavan, Principal Scientific Advisor to the Government and Co-Chairperson for COVID-19 Development & Research Task Force also asked people to not be worried about the vaccination and get the jab as per the schedule. He said,

We need to understand that there are three components that affect this virus – one is what we do – the people or society by wearing a mask, maintaining social distancing and washing hands, this can stop the virus enormously. The second is what the virus does – it changes regularly and it can become worse or better, so scientists need to watch out for that and prevent the virus from increasing. The third component is are the tools which affect the virus in extreme ways like vaccines. So, the faster and widely we use this tool, the virus’s opportunity to change become less and less. So, when one is asked to go for their vaccination, one should go for it without any second thoughts.

In his address to the nation, before the launch of the vaccine drive, PM Modi had also urged people to steer clear of misinformation surrounding vaccines. He had said that Indian scientists and experts have given emergency use licenses to two COVID-19 vaccines only after they were confident about the safety and impact of both the vaccines. MoHFW has also been asking people to trust only official channels of communication for all information related to vaccination and not be hesitant and doubtful in accepting the vaccine.

Coronavirus Found In Ice Cream Samples In China, Can The Virus Spread Through Food? Experts Explain