During the colonial as well as post-colonial phase, India has been witnessing construction and operation of large-scale, centralized wastewater sewerage systems in cities. These are generally operated in parallel with the water supply infrastructures. However, this centralized approach has been unable to keep up with the pressure due to rapid urbanization and exponential growth in urban population thereby leading to abysmal performance in two key indicators of sewage management: a) percentage of sewer network laid, b) treatment capacity of the wastewater generated.

The Twelfth Five Year (2012–17) Planning Commission (now NITI Aayog)  Report on Urban Development highlights that 4861 cities and towns in India lack even a partial centralized sewerage network and almost 50% of households in metropolitan city such as Bengaluru do not have sewerage connections. According to the Swachhta Status Report 2016, released by the Ministry of Statistics and Programme Implementation (MOSPI) representing 99.3% of the population, 56.4% wards in India are reported to have sewer network for disposal of liquid. This indicates only a marginal improvement from around 50% sewer connection as per Census 2011 data. 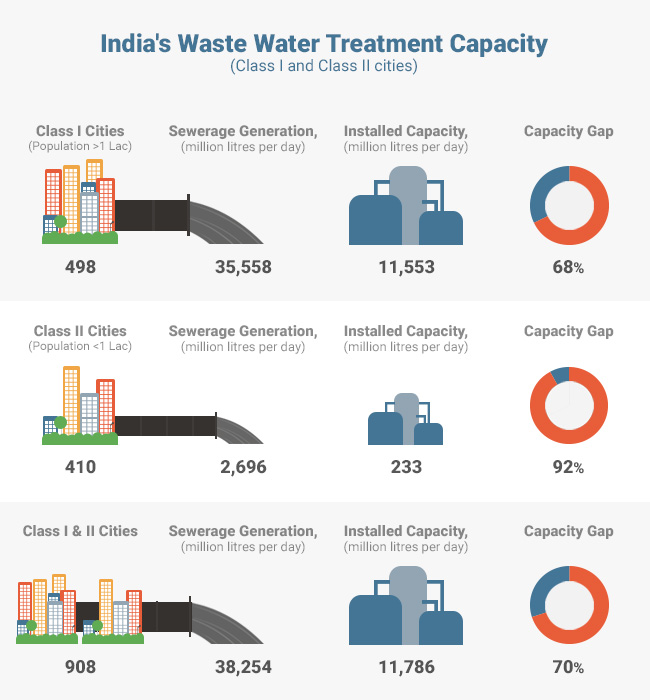 The centralized approach to urban sanitation is not only capital intensive but also produces inequality of coverage and services in lower-income areas. At the current rate of progress of sewer network and the treatment infrastructure development, it shall take several more decades to achieve safe disposal of the liquid waste in the cities. What is suitable in Indian context is to adopt a hybrid approach of centralized as well as decentralized planning to bridge the gap in wastewater treatment and abate the water scarcity and rising levels of water pollution.

An interesting Indian case of adoption of decentralized waste water treatment and reuse system at a city level has been in Bengaluru. The city’s centralized wastewater treatment systems have not kept pace with the growth in water use. While imported water increased from 453 MLD in 1991 to 1360 MLD in 2013, the total installed sewage treatment capacity is only 58% of the total sewage generated and much of the wastewater is dumped into the lakes in Bangalore. In the backdrop of water scarcity and inadequate treatment capacity, the Karnataka State Pollution Control Board in 2004 mandated buildings with either more than 50 residential units or a built-up area of more than 5,000 m2 in un-sewered areas to install on-site sewage treatment plants and reuse 100% of the treated water. 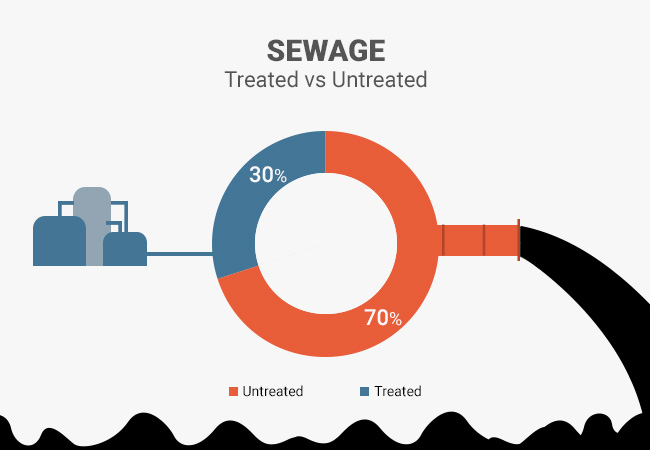 By 2014, there were at least 2,000 buildings in Bengaluru which have installed a decentralized sewage treatment plant with an estimated total installed capacity to be around 110 MLD or 10% of the total wastewater generated in the city. Since this was found to have minimal impact on wastewater discharged into lakes, the Bangalore Water Supply & Sewerage Board (BWSSB) has made it mandatory for any structure consisting of 20 or more houses or apartments/flats to provide STPs within their premises. The treated waste-water is used for toilet flushing (by incorporating dual pipeline), landscaping, gardening, car-washing etc. This reduces the overall water demand from the municipal board or the bore-well, saving electricity cost of pumping.

In another instance of Agra City, a Decentralized Wastewater Treatment (DEWAT) system was designed and constructed on the Kachhpura drain, located closed to the Tajmahal, by Agra Nagar Nigam in association with Centre for Urban Regional Excelllence (CURE), USAID and other partners. Prior to this decentralized system, the condition was highly insanitary with high health risk for its residents. The DEWAT system has created a cleaner environment with BOD levels down from 170 ppm to nearly 30 ppm. Also, the large, open, kuchhaa drain which was a breeding ground for disease gems is now a safe space for community activities/recreation.

The abysmal performance of centralized approach suggests that India needs to adopt decentralized model of waste water treatment and reuse. Though the Bengaluru law of 100% re-use has been very stringent and has led to its partial implementation on-ground but it has served as a great pilot for cities to adopt such forward looking reforms. There is an urgent need for effective legal and policy framework for improved management of wastewater treatment. Through a rightful combination of increased water tariffs, stricter enforcements and incentives for early adopters, the decentralized waste water treatment and reuse system could pick up the momentum. In the longer run, this shall serve as a way forward for India’s sanitation tail-end challenges as it is economically feasible and financially viable and sustainable.

* This publication is part of a research study on Urban Water and Sanitation in India, which is coordinated by Coca-Cola Department of Regional Water Studies at TERI University, New Delhi and is funded by the USAID. The views expressed here are sole those of the authors and not of the affiliated organizations.

Ankit Tulsyan is a Detail Oriented Sustainable Development Professional with 3.5 year of experience in Water and Sanitation domain.

Dr Girija K Bharat is a Senior Consultant with TERI and has over 25 years of experience in conducting research on Water Supply and Sanitation, Water Quality Assessment, Water Resource Management and Environmental Management.