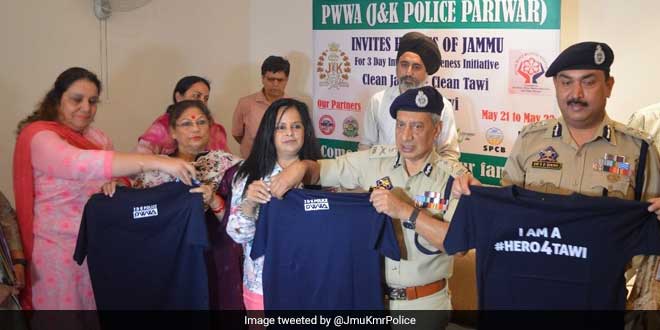 New Delhi: Thousands of students, volunteers, NGO members, as well as government officials came together and participated in an awareness walk, to mark the beginning the 3-day ‘Clean Jammu-Clean Tawi’ campaign. The three-day long campaign has been organised by the Jammu and Kashmir Police Wives Welfare Association (JKPWWA) and will conduct awareness drives on plastic pollution, waste management and general cleanliness. The campaign was inaugurated by Sat Sharma, State Minister for Housing and Urban Development, and Shesh Paul Vaid, Director General of Police, Jammu and Kashmir.

Cleanliness has been a major problem in Jammu and Kashmir, as despite four years of the Swachh Bharat Abhiyan, the state has not been able to make considerable progress in the waste management front. In Jammu, many households and shopkeepers were provided with two colour-coded dustbins in 2017 to encourage waste segregation, but not much progress has been made in both sensitising people to segregate waste, or managing waste collection and disposal properly. The JKPWWA is hopeful that the campaign will bring forward the larger issues related to waste management in the state, and make people aware of what roles they can play to ensure a waste free Jammu and Kashmir.

The campaign for a cleaner Jammu fits the vision of Prime Minister Narendra Modi’s dream of a Swachh India. Everyone should come forward and contribute to make the city clean, said Sat Sharma, Housing and Urban Development Minister, Jammu and Kashmir.

The Housing Minister also said that such initiatives were important to instill in people a sense of cleanliness and how they can play important roles to keep their surroundings clean. Over 3,000 students walked along the banks of the River Tawi, and along with other participants, pledged to keep their surroundings clean. Along with taking pledges to not dispose waste, the students and officials pledged to maintain cleanliness of the Tawi river.

Throughout the duration of the campaign, extensive programmes on waste management, quizzes on cleanliness and cleanup programmes will be held across Jammu. Some of the planned programmes will be held on the banks of the river Tawi, to give people a better idea on how indiscriminate disposal of waste also adversely affects rivers. The state police department has further stated that a similar campaign will be undertaken in Srinagar from September 2018.