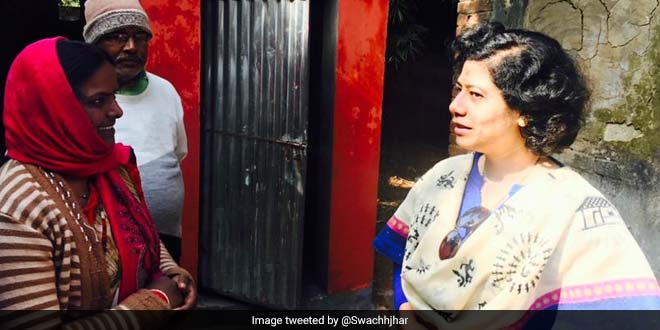 New Delhi: Jharkhand’s aim to achieve the open defecation free (ODF) tag by 2018 received an early boost right at the onset of the new year,as it announced that the district of Hazaribag will go ODF by end of this month. The announcement was made by the Deputy Collector of the district on January 14, and has rightly taken the state a step forward towards achieving its ODF goal. Hazaribag is made up of 16 blocks, out of which 11 have already been declared ODF, paving the way for the district to become ODF by January end.

As far as developmental indicators are concerned, Hazaribag has traditionally been a poor district. In 2006, the district was named as one of the 250 most backward districts in India. Even after a year of Swachh Bharat Abhiyan’s launch in October 2014, sanitation coverage in the district languished at a low 30 per cent. It was only since mid-2015 that sanitation was prioritised in the district and a target based approach was undertaken, under the supervision of then Deputy Commissioner Mukesh Kumar. A target of building 50,000 toilets in 2015 was undertaken and successfully completed, which gave the district officials hope that the requirement of around 1.7 lakh toilets in the district could be met by 2018.

Nearly 93 per cent of the district is open defecation free today, though such numbers were unthinkable even two years back. Many of the households not only had no toilets, but were unaware of how the government was willing to help them construct toilets. Our awareness teams conducted several campaigns in all 16 blocks of the district and gradually roped in people to begin large scale construction of toilets across the district, said Ravi Shankar Shukla, Deputy Commissioner, Hazaribag.

Stressing on the importance of behavioural change and not just toilet construction, the district administration also undertook some innovative steps to improve the percentage of people using toilets. Introducing a ‘sticker’ system to tackle the challenge of open defecation, the district administration used stickers of multiple colours to identify houses. Houses without toilets were marked with black stickers, whereas houses with toilets but members of which continued to defecate openly were marked with yellow stickers. For the latter, teams of Swachh Bharat volunteers and district officials went to such houses and convinced the residents to use the toilets already built, as doing so would keep diseases at bay.

Toilets built but not used was a big challenge for us and to overcome that, we identified and approached households where such practices were found. Though age-old habits die hard, many such households, after due consultation with us, began using toilets regularly. In between 2015 and end of 2017, we managed to build more than 1,00,000 toilets in the district,” said Mr Shukla.

At present, the district has over 1,60,000 individual household toilets (IHHLs) and work is nearly complete towards construction of 10,000 of the remaining toilets across the five non-ODF blocks. Work is being carried out on ‘war-footing’ says the Deputy Commissioner.

It was not long ago that Jharkhand Chief Minister promised an ODF Jharkhand by 2018. The district’s overall rural sanitation coverage rests at 67 per cent and if Hazaribag becomes ODF by January this year, it will be only the fourth out of 24 districts in the state to achieve the distinction. Though Jharkhand has several miles to go before  state’s ODF target is met, Hazaribag’s achievement is indeed a big milestone for the state and sets the swachh agenda for rest of the year.

Sachin Tendulkar And Other Sport Personalities Give A Boost Swachh Survekshan 2018, Participate In Clean-Up Drives