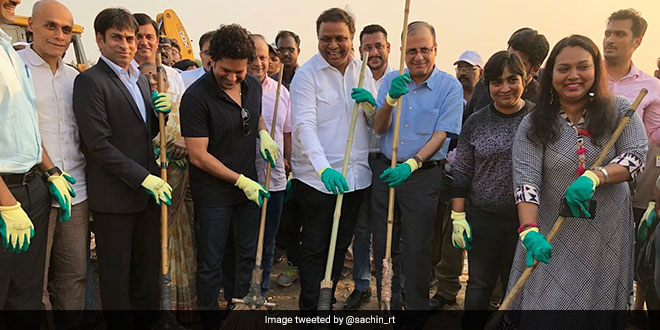 New Delhi: India’s sports fraternity has come together to participate in clean-up drives in their city along with the municipal corporations to encourage citizens to improve the rank of their city in Swachh Survekshan 2018. Cricket icon Sachin Tendulkar joined hands with Brihanmumbai Municipal Corporation (BMC) to take part in the clean-up initiative in Mumbai. Sachin Tendulkar later shared pictures of the activity with netizens and said,

“Honoured to be a part of this excellent cleanliness initiative by the BMC.”

Honoured to be a part of this excellent cleanliness initiative by the BMC. #SwachhBharat pic.twitter.com/BwqioNKFjS

This was a much needed Bandra Chimbai beach and Khar Danda Varin Pada beach clean-up. Now the beach will be clean from special fund, thanks @sachin_rt, Ajoy Mehta & all corporator present in the function.

Apart from the clean-up drive, Sachin Tendulkar through a short video also urged his fans to come forward and help people use toilets. He added,

You all have to stand up with me and team Swachh Bharat, you have to become part of this mission. And, together we all will make India truly swachh, where every individual uses a toilet. Because, if everyone make use of a toilet, we as a nation will progress.

Apart from Sachin, India’s FIFA U-17 World Cup star Dheeraj Singh Moirangthem too supported clean-up activity in A Manipur district along with Moirang Municipal Council in order to spread the word about Swachh Survekshan 2018.

This time too, the sport personalities have come forward to promote Swachh Survekshan 2018, which is for the first time assessing all the 4,041 towns in the country.

Jharkhand’s Open Defecation Free Mission Gets Off To A Good Start In 2018, Hazaribag To Join The List of ODF Districts In The State