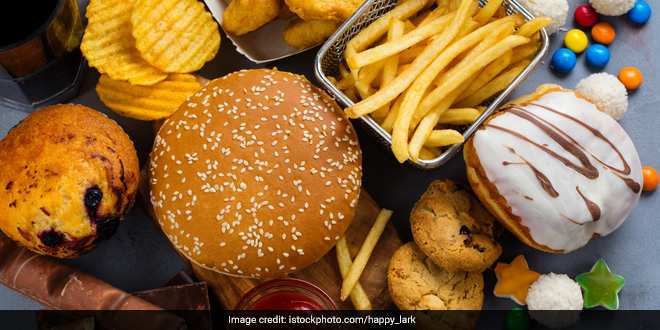 New Delhi: It has been a known fact that junk foods mostly contain empty calories and not good for health. Yet new laboratory analysis on junk food, Centre For Science And Environment, a Delhi based research and advocacy group reveals some alarming and worrying facts. It has claimed that most of the widely consumed processed foods are a threat to public health, especially children. The lab study has found that most packaged and fast items being sold in the country contain dangerously high levels of salt and fat in them. The levels have been found to be way higher than the thresholds proposed by the Food Safety and Standards Authority of India (FSSAI). While talking to NDTV, Amit Khurana, programme director, food safety and toxins team, CSE, said,

We test salt, fat, transfats and carbohydrates in 33 popular packaged and fast foods, which include 14 samples of chips, namkeen, instant noodles and instant soup and 19 samples of burgers, fries, fried chicken, pizza, sandwich and wraps. These samples were collected from grocery stores and fast food outlets in Delhi and some are very well-known and popular brands that widely sold and consumed across the country. We found that none of those items met the recommended thresholds proposed by FSSAI. The high levels of salt and transfats are the root cause of various lifelong non-communicable diseases like hypertension, cardiac disorders and diabetes.

He further said that if the government is really serious about controlling the burden of obesity and non-communicable diseases then just like tobacco, junk food labels also need to contain a warning.

According to Mr. Khurana, junk foods are called so because these have zero nutritional value and are high in calorie. He asserted that because of being high in calorie content, even a single serving of junk food can exhaust the per day calorie need of a person or the Recommended Dietary Allowance (RDA). The concept of RDA accepted globally was established by the Food and Nutrition Board of the National Research Council/ National Academy of Sciences. It is used to understand how much of any nutrient (salt, sugar, fat) should be consumed from different meals based on serving size or weight of the food. RDAs are set separately for specified life stage groups and sometimes they differ for males and females. For example, a person who requires 2000 Kcal per day, has an RDA of 5 grams for salt, 60 grams for fat, 2.2 grams of trans fat and 300 grams for carbohydrate, as per the World Health Organisation. Mr. Khurana said,

A person usually consume three meals and two main snacks in a day. If junk foods become part of any of these meals/snack, a large proportion of RDA gets exhausted. One packet of popular noodles exhausts over 50 per cent of salt RDA. Similarly, a big chicken burger exhausts 92.1 per cent of salt RDA and 53.2 per cent of fat RDA.

He further highlighted that even after having heavy junk food, people would go for the meals and snacks during the rest of the day including nutritious home-cooked meals. This makes them consume salts and fats in much higher quantities than needed by a human body.

Talking about the need to educate people on their daily consumption of harmful substances, CSE Director General, Sunita Narain said,

There is an urgent need to educate people on what they are consuming on a daily basis so that they can make informed choices. A mother should know that if her child is eating one pack of noodles then the child needs to balance the RDA through boiled veggies, in order to keep a healthy balance of nutrients.

CSE’s Recommendation: Put A Red Warning Display On the Front Of The Package

Ms. Narain said that to inform if the salt and fat levels are high in a food item or not, there should be a label on the front of the package or the box/menu. She said,

Various countries like Chile, Peru, Israel and Canada have started putting warning signs on junk food. These are very simple signs which can be comprehended by even those who are not literate. It is the consumer’s right to information that must be protected.

She questioned the FSSAI on delaying the finalization of the regulation that calls for marking all food items that are high in salt, fats or sugar as red and those within the limit as green. She said,

FSSAI is dragging its feet around this regulation from over six years and has not notified its own draft labelling regulation. Why is there so much delay?

When NDTV reached out to FSSAI to know about the reasons for the delay in finalising the draft regulation, an official said that the draft is being reviewed by various departments and the final regulations will be released by the authority this year.

The draft proposes to mandatorily declare the quantity of salt, added sugar, saturated fats, transfats and cholesterol. The draft further proposes that labels must comprise information on serving size and per serve percentage contribution of a particular nutrient to the recommended dietary allowance (RDA). ‘Serving size’ suggests the quantity of a food product customarily consumed. RDA is recommended maximum daily intake of salt, sugar and fats. Beyond this, the daily diet is considered unhealthy.

The most important part of the draft rules is the Front-of-Pack (FoP) labelling and ‘red-coloured’ warning symbol to help identify foods high in calories, saturated fats, transfats, added sugar and salt. The proposed FoP label will depict information on the number of calories and quantity of salt, added sugar and fats per serve. The label will also include how much of the RDA is exhausted by eating one serve of the packaged food. If salt, added sugar and fats in a packaged food exceeds a certain threshold level, the red warning symbol will appear on the package.

Apart from marking the junk food red, the experts have urged the Union Ministry of Health and Family Welfare and FSSAI to direct the food industry to reformulate the packaged and fast food items to give public health the utmost priority and not just the profits.

Related Topics:
Center for Science and Environment Nutrition Swasth India
Up Next