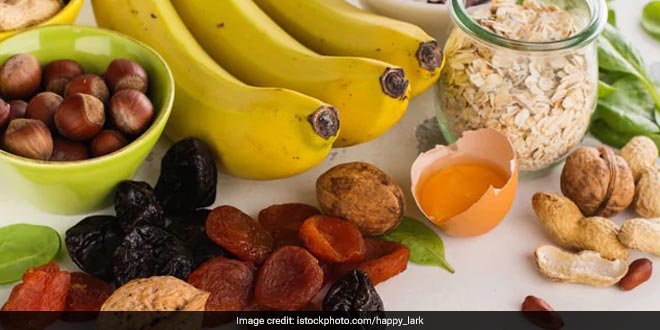 New Delhi: Parents in India have been trusting the ‘magical’ powers of turmeric milk for the health and recovery of their sick and wounded children since long before the western world started swooning over ‘turmeric latte’. Not just the golden milk, but many other superfoods of India like coconut oil, gooseberry, ragi or finger millet have been gaining immense popularity around the world. As per experts, superfoods are super because of the high nutritional content present in those foods like antioxidants, fibre, healthy fats, minerals, vitamins and proteins. To find out more about the importance of superfoods and how to consume such power-packed foods, NDTV conducted a Facebook Live interview with the celebrity chef and Padma Shri awardee Sanjeev Kapoor where he answered questions from the social media users.

Here are the major takeaways from Chef Kapoor’s interaction:

Anything Which Is Local, Seasonal, And Fresh Is Superfood

In the contemporary context, where food has almost become as glamorous as fashion, people tend to believe that superfoods are some strange things that come from a faraway land and a lot of money must be spent to add superfoods in the diet, says Mr. Kapoor. However, as per him, the food which is produced locally, is seasonal and fresh can be considered as superfoods. He says,

Simple food items like drumsticks and ragi that could be found easily are superfoods. But from India the world has adopted these superfoods and these have now become costly. When a local food is reaches the west, the packaging of the usefulness of that food item is done in such a way that people start respecting that and it becomes a trend.

He suggests that in India, people can easily include gooseberry or ‘amla’ in their diet which is a low-cost superfood. ‘Amla’ is rich in Vitamin C, increases immunity and improves iron absorption in the body. To beat malnutrition, food items like millets, legumes, leafy vegetables that grown locally can be added to the diet.

Mr. Kapoor suggests that to get the maximum benefits of superfoods, the consumption must be done in as natural form as possible. He says,

Excessive Consumption Of Superfood Can Have Negative Health Impacts

While answering a question on side-effects of superfoods, Chef Kapoor asserted that any food item consumed in excessive quantities will have a negative impact. He said that the key is to have superfood in balanced quantities. He said,

One needs to remember that because something has good nutrients and health properties, one should not consume it in high quantities. Moderation in the key here. Keep in mind your weight, age, physical activity and consult while having superfoods. Excess of goodness can be toxic. For instance, if one starts taking too much of protein, it will start putting pressure on their kidney.

Having More Junk Food Is Dangerous And Must be Avoided

According to Mr. Kapoor regular consumption of junk food is dangerous and must be avoided. He says that the ill-effects of junk food are visible in the long term because of which people do not realise the kind of toxins they are inviting in the bodies through junk food.

Answering another question on alternatives to junk food and high calories snacks, Mr. Kapoor said that each kind of junk food has a texture and crispiness is a texture that scores the highest among junk food. He suggests relying on snacks made from millets to fulfil the hunger pangs. He says that millets are inexpensive, can grow in arid land and so widely available and extremely nutritious. He said,

The Three Mantras Of Keeping Healthy

According to Mr. Kapoor three golden rules must be followed to live a healthy life- having a balanced diet including fruits and vegetables, regular physical activities and enough sleep and rest. He says,

There is no meal better than a balanced meal for the body. Having a balanced diet will not only fulfill the nutrient needs of the body but will also strengthen the immune system. Secondly, one must remain active in their daily lives and for this one does not need to go to an expensive gym. Habit like taking stairs and walking are just as enough. Thirdly, the body needs rest and many people tend to overlook this need of the body. It is important that we work on destressing our bodies and keep ourselves calm for better body functions especially digestion which plays a very important role in the health of a person.

Watch the full video of the discussion on ‘Are There ANy Indian Superfoods And Are hey Good Enough?’ with Celebrity Chef Sanjeev Kapoor