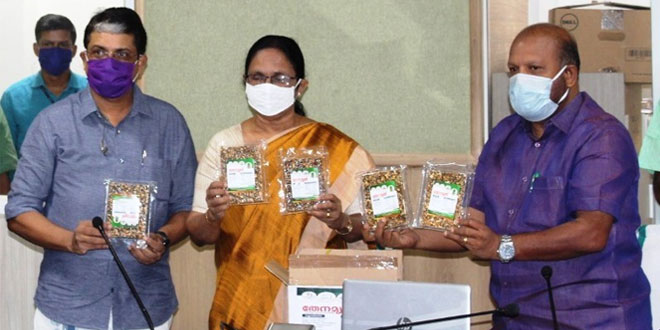 New Delhi: To fight malnutrition among children in the state, the government of Kerala has launched a nutrition bar that is rich in iron, calcium and protein. Named ‘Thenamruth’, the nutrition bar has been created jointly by the Department of Women and Child Development (WCD) and the Community Science Wing of the Horticulture College Vellanikkara, Thrissur under the Kerala Agricultural University (KAU). According to Dhanya Sooraj, Consultant Nutritionist, National Nutrition Mission- Kerala, the supplement is developed as a part of WCD’s Department’s Sambushta Keralam (nutrient-rich Kerala) project.

Also Read: Living With COVID-19 This Is How Students In Kerala Appeared For Their School Exams Amid The Ongoing Pandemic

While talking to NDTV about the initiative, Ms. Sooraj said that the nutritional supplement seeks to improve the general immunity and disease resistance capacity of children between the ages of three and six who are suffering from ‘severe underweight malnutrition’.

Explaining about the nutritional contents of ‘Thenamruth’, Dr. Seeja Thomas, Head of Community Science Department, Vellanikkara, Thrissur, who is leading the project said,

The nutrition bar is made with over 12 ingredients like rice, corn, wheat, ragi, soya flour, Bengal gram, groundnut, sesame, jaggery and liquid glucose. It is rich in nutrients such as iron, calcium and protein. A 100-gram bar comes with 439.65 calories, 15.05-gram protein, 13.21 gram of fat content, 5.23-milligram iron content and 238.71-milligram Calcium. It complies with the dietary requirements of a child as recommended by the Ministry of Health and Family Welfare (MoHFW) and the World Health Organisation (WHO).

She also added that each nutrition bar will cater to one-third of the daily nutrient and calorie requirement of children.

According to Ms. Sooraj, the state has identified over 5,500 (5,537) children across all 14 districts of Kerala who suffer severe underweight malnutrition. These children are enrolled with Anganwadis and are already being provided with food as per the norms of the Integrated Child Development Service (ICDS). The department of WCD plans to eliminate the problem of severe underweight among these children within one year in a targeted manner, she said. Currently, the department is carrying out a pilot project for one month under which the weight, height and other body measurement, deficiencies in the targeted children will be measured at the start, during and end of the project. During this one month, one nutrition bar will be given to each malnourished child every day free of cost and efforts will be made to understand if children are comfortable in taking the bar or if they are facing some problem in terms of taste or quantity.

So far, 1,15,000 units of nutrition bar have been prepared by KAU for distribution. The department is distributing the nutrition bars through Anganwadi workers in each village who are already distributing food to children at their home during the current COVID-19 lockdown, said Ms. Sooraj. The distribution has been completed in Thrissur district.

She further said that the product is also a step forward to increase awareness about the importance of nutrition and how nutrition can help in building immunity and a healthy future.

Status Of Malnutrition In Kerala

A Group Of Good Samaritans In Madhya Pradesh Is Feeding, Providing Essentials To The Labourers Amid Covid-19 Lockdown