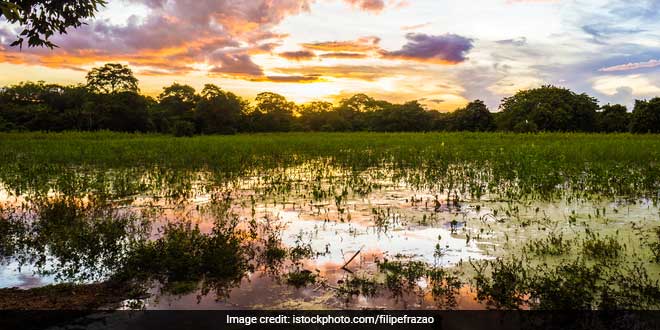 Kolkata: The East Kolkata Wetlands (EKW), a Ramsar site that nurtures the world’s largest wastewater-fed aqua culture system and is also the city’s natural cleansing system, is under threat, said an expert. The sprawling 12,500 hectares wetlands also save the authorities a whopping Rs 5 billion in a year in sewage treatment costs.

But one of the major concerns, is the shift from traditional vocations, including fishery, to modern options such as a salaried job, says urban economist Mahalaya Chatterjee.

“If the EKW fails to provide the natural treatment service, Kolkata will lose nearly Rs 5 billion a year. The wetland treats waste from the city and has saved on the cost of building and maintaining a conventional treatment plant,” said Ms Chatterjee, Director, Centre for Urban Economic Studies, Department of Economics, Calcutta University.

She said to retain the low-cost option of sewage treatment the “dominance of sewage-fed fishery is of strategic importance”.

There is an extreme shift from traditional vocations such as fishery, agriculture, animal husbandry to modern businesses, professional work, including salaried jobs. Traditional vocations are becoming less rewarding, Ms Chatterjee said here on Monday at a workshop organised by IIT Kharagpur and Indiana University of Pennsylvania.

The wetlands encompass nearly 254 sewage-fed fisheries distributed across the districts of South and North 24 Parganas. It provides about 150 tonnes of fresh vegetables daily as well as some 10,500 tonnes of table fish per year. The latter provides livelihood to about 50,000 people directly and as many again indirectly.

The key push factors for vocation switch are obstructed wastewater flow due to encroachment and other reasons, siltation in sewage-fed fish ponds, over-dredging of wastewater canals affecting the natural gradient and the changing signature of bio-chemical components in sewage water, said Ms Chatterjee.

She said with increased options of modern vocations, better availability of formal education, increased awareness and formal training (skill), conventional livelihood sources are losing out on the draw.

Besides, there is the pull to have increased connectivity to Kolkata via flyover or roads.

If development of the posh satellite township Salt Lake City in the north-eastern fringes of the city reclaimed a part of the wetlands in 1960s, then almost two decades later, construction of Eastern Metropolitan Bypass, which enhanced the connectivity of the area with the city, made the wetland more accessible and made it an attractive site for real estate speculation.

The West Bengal government now plans to build a Rs 600-crore flyover, connecting the airport to Science City, which requires construction of some pillars over the wetlands, for which 10-12 cottahs (a measure of land in Bengal, equal to 720 square feet) will be used.

The state government has promised compensatory digging of a 25-cottah lake in the adjacent area.

Kerala On A Swachh Mission, Hotels Stop The Usage Of Plastic Straws