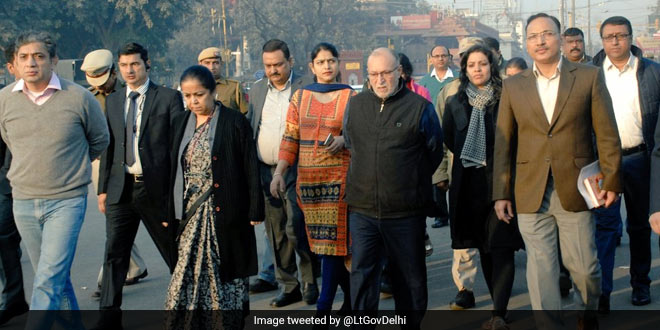 New Delhi: After paying a visit to the Red Fort, Lieutenant Governor Anil Baijal on December 9 directed officials to renovate the facade of the 17th century fort and clean the parks and drains near it and conceal the overhanging wires.

Lt. Governor directed the ASI (Archaeological Survey of India) to facelift the frontage of Red Fort and ensure its proper cleanliness in the parks opposite Red Fort, drain abutting Red Fort, an official statement said.

Red Fort in Old Delhi was built by the Mughals and it served as their palace.

LG Baijal who visited the area also asked officials to do proper re-carpeting of roads leading to Red Fort, Chandni Chowk, and Jama Masjid and urged them to clean the entire area, including public conveniences, at least twice a day.

He also asked telephone and electricity companies to conceal overhanging wires by December 31 as it might cause public hazard and also looked shabby.

The Commissioner of North Delhi Municipal Corporation (NDMC) was asked to conduct a meeting with all service providers to get overhanging wires concealed.

The Lt. Governor also directed that NDMC to coordinate with market associations of Chandni Chowk, Meena Bazar, Dharampura and others to enforce display of uniform signboards in front of each shop in the area.

LG Baijal was accompanied by officers of NDMC, Public Works Department (PWD), and ASI among others.