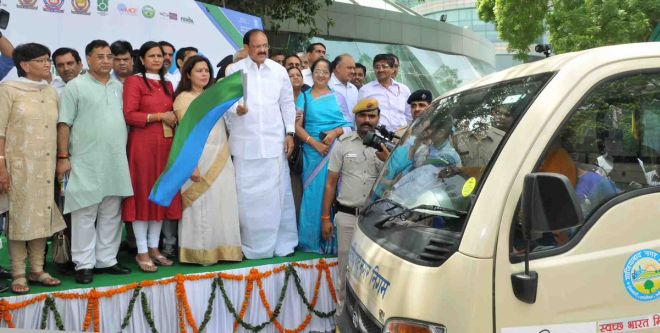 The government today launched the nationwide Waste Segregation at Source campaign on the occasion of World Environment Day. The 4-month long campaign covering about 4000 cities and towns, was launched in New Delhi, by Minister for Urban Development, M Venkaiah Naidu and will continue till October 2. All the local civic bodies of Delhi and National Capital Region (NCR) came together for the first time to take the Swachh Bharat Abhiyan pledge. When it comes to Waste Management India is struggling, it produces close to 1,00,000 metric tonnes of solid waste every day, which is higher than many countries’ total daily waste generation taken together and a whopping 75% of the waste makes its way to our overflowing landfills, untreated. In the National Capital Region alone, about 15,000 tonnes of municipal solid waste is being generated every day. With the launch of the campaign today, 4,000 urban areas along with the national capital of India is set to try out waste segregation at source campaign to tackle the country’s waste problems. Waste segregation at source means that waste generators, households or commercial establishments, will not just dump their garbage – they will first segregate it into wet or kitchen waste which will be collected in Green Bins and dry waste which is non-biodegradable in blue bins. The segregation is the first step to scientific waste management. Once segregated each category of waste can then be treated separately rather than make its way to the landfill.

Here are the highlights of the launch of the waste management campaign by M Venkaiah Naidu in New Delhi: