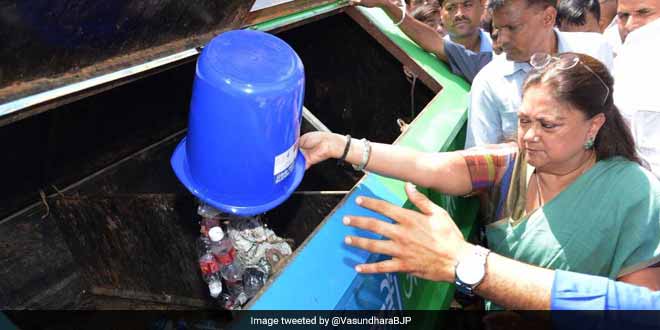 Taking forward Prime Minister Narendra Modi’s announcement, on ‘Mann Ki Baat‘, of launching a four month long “massive” waste segregation drive across India, the Chief Minister emphasised on the need to maintain a clean and healthy environment, “Rajasthan will be a healthy state only if it is clean,” the chief minister said.

She gave the slogan ‘Clean Jaipur-Healthy Jaipur and ‘Clean Rajasthan-Healthy Rajasthan’ and appealed to the residents of Rajasthan to separate dry and wet waste. “Proper waste disposal is only possible if everyone puts wet garbage in green bins and dry garbage in blue bins. This way we can ensure the safety of our environment as well,” she said.

She also urged people to spread this message across the state, abide by it and help the state government in making this a successful mass movement.

“Segregation is vital for waste management and #environment preservation—Let’s abide by the practice of segregating waste at source #BlueGreenPledge,” she tweeted.

Segregation is vital for waste mgmt. & #environment preservation—Let's abide by the practice of segregating waste at source #BlueGreenPledge pic.twitter.com/pMYC5wYGvt

She further added, though the waste segregation campaign will kickstart in Rajasthan’s capital city, Jaipur, it is also mandatary for other cities to follow the footsteps, I hope all other cities, whether big or small, will also adopt this campaign for the disposal of garbage.

The Chief Minister also distributed green and blue dustbins to the people coming from different wards so that people can keep them in their houses and segregate wet and dry garbage.