The stinking truth is that more than half of the 1.2 billion people in India live without toilets. As a result they defecate in the open. This state of India is even when the government has spent close to Rs. 1,25,000 Crores on water and sanitation projects for the last 20 years.

For a clean India drive, Mahindra Group Chairman and MD, Anand Mahindra, lent support to the Swachh campaign and donated Rs. 30 Crores in 2014 during the Banega Swachh India 12-hour cleanathon.

Mahindra & Mahindra is the only Indian company with mobility products that cover land, water and air. The company also tops the list of corporates involved in construction of toilets in schools under the government’s Swachh Vidyalaya Abhiyan initiative.

Speaking to NDTV about ‘Swachhta’ Anand Mahindra added, ‘First and foremost, we should identify people below the poverty line and get them to maintain the toilets. We also need to figure out ways to get people to own and sustain this initiative.”

Rajeev Dubey, Group President – HR & Corporate Services & Member of the Group Executive Board, explains the utilization of Rs. 30 Crores committed to the campaign so far, “Till now the company has spent Rs. 24 Crores on the construction of 4,597 toilets which are spread over 1,171 locations across 11 states and 104 districts in India.”

The remaining Rs. 6 Crores will be spent over the next one year on capacity building for proper usage of the toilets, the daily up-keep of the toilets and the required engineering and structural maintenance. For now, Rs. 1.5 Crores have been spent on these three activities. Here’s what has been achieved so far: 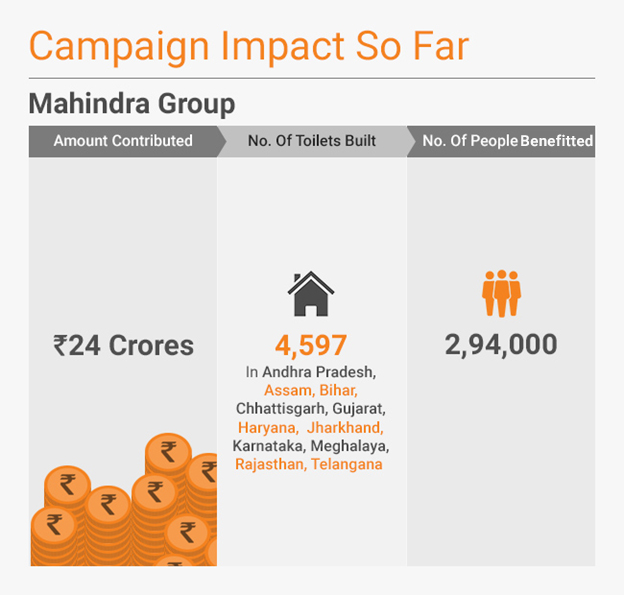 Top 4 Highlights of the Mahindra Group’s Campaign are:

‘I Feel Safe After Receiving COVID-19 Vaccine,’ Said A Health Worker During PM Modi’s Interaction With Beneficiaries At Varanasi

COVID Vaccination Precautions: Experts Say COVID-19 Vaccines Are Absolutely Safe, However, Those With Allergies Should Avoid