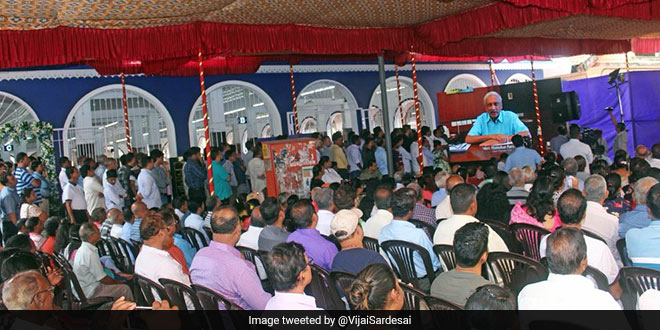 New Delhi: Goa Chief Minister Manohar Parrikar has been consistently raising the issue of plastic pollution. Continuing his opposition to indiscriminate use of plastis Mr Parrikar on Monday urged people to be responsible with plastic, given its detrimental impact on the environment Mr Parrikar, who resumed office last week after a three-month long treatment in United States for pancreatic cancer, said that plastics were responsible for most of the pollution in oceans and must be used and disposed of carefully. Using plastic bags or products carelessly can pose a threat to the environment and make its condition worse than it already is, said Mr Parrikar.

Ever since he resumed work, Mr Parrikar has been communicating via video messages regularly. At the inauguration of a new fish market at south Goa’s Margao area, Mr Parrikar sent a minute-long video message, congratulating the South Goa Planning And Development Authority for the successful completion of the market’s construction. Talking about plastic, Mr Parrikar said that the newly inaugurated market should adhere to the principles of cleanliness set by the Swachh Bharat Abhiyan, and it was up to the people to maintain the cleanliness of the market. The Goa CM said that people should stop throwing plastic everywhere as it does not decompose and when thrown in oceans or seas, causes significant harm to marine life.

Hon CM @manoharparrikar in a video message reaffirms #GoaGovt’s commitment to take up upgradation of remaining phases of the #SGPDA market.We thank him for this and his guidance that has made us fulfill our commitment to create an iconic fish market @SGPDA & take #Fatorda forward pic.twitter.com/dkWRR6hNHr

In his first public speech on June 19 after resuming office, Mr Parrikar said that the mission to make Goa a plastic free state was delayed due to his illness. Mr Parrikar however, said that he was determined to achieve the target on his return, and promised to make Goa a plastic free state by the end of 2018. In 2017, Goa took strong measures against the widespread use of plastic in the state, which were polluting many of Goa’s beaches and resulting in marine pollution. Sale of lightweight plastic bags is banned in Goa and shopkeepers violating the rule are fined Rs 4,000 per month. In its bid to discourage the use of plastic, the state government of Goa has also banned the use of plastic cups and bottles in all government programmes. The state’s waste generation has come down to 600 tonnes per day in 2017-18 from 900 to 1,000 tonnes daily in 2015-16. Some towns, such as Saligao are segregating over 80 per cent of their waste. Goa, which aims to go completely waste free by 2020 and open defecation free by October 2018, will need some strong action on ground, apart from such messages of optimism and encouragement from the Chief Minister.