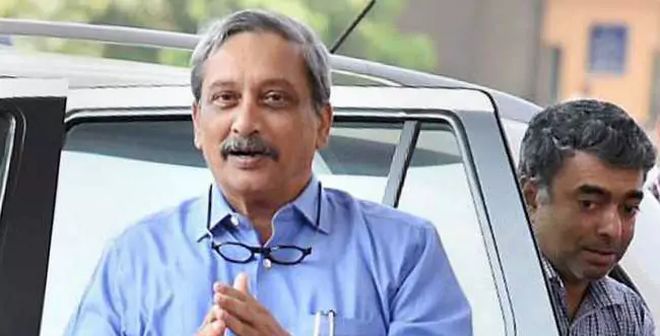 New Delhi: ‘Our mission to make Goa plastic free by 2018 was delayed because of my illness,’ said Goa Chief Minister Manohar Parrikar said on Monday during his first public speech at a Goa Revolution Day event in Panaji, after his return from the US where he was being treated for advanced pancreatic cancer for over three months. He further said that the state government will take strong steps to achieve the target.

We will take powerful steps to ensure that Goa is plastic free by 2018. Because of my illness, there was a delay, but I want to tell the people that these things need to happen, added Chief Minister Manohar Parrikar.

Last year, on the same day, Mr Parrikar had made a promise to make Goa plastic-free by 2018. Expressing concern over plastic litter, he said that even educated people litter plastic because they lack knowledge.

Educated people throw plastic and dirt in the Mandovi river. When educated people do this, lack of knowledge is the reason. We are educated, but we do not have knowledge. Let us not have mere education, but knowledge too in Goa. Education gives us information, knowledge takes you beyond it, added Mr. Parrikar as he vowed to make Goa a knowledge-rich society.

The coastal state of Goa decided to be part of the solution and declared war against plastic pollution back in 2017. The state has already banned the sale and use of lightweight plastic bags. A fine of Rs 4,000 per month or Rs 48,000 per year is imposed on shopkeepers who violate the law. The government has also banned the use of plastic cups and plastic disposable bottles in all government functions. Apart from being a plastic-free state, Goa has undertaken another swachh mission of becoming a zero-waste state by 2020.

To help it achieve this goal, the state has already installed 100 compost sites across Panjim, Goa’s capital city, to treat organic waste. Talking about open defecation free (ODF) target, the state aims to get the coveted tag of go ODF by October 2018.