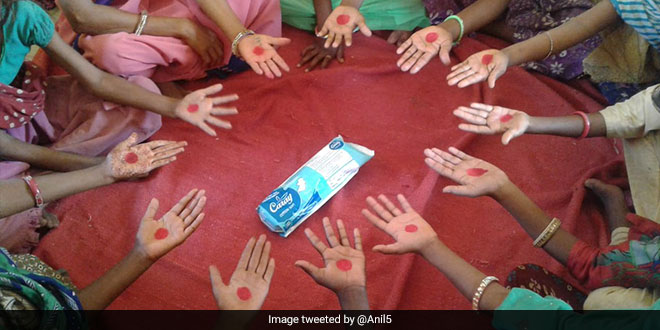 New Delhi: May 28 is observed at Menstrual Hygiene Day worldwide and the trending challenge for the day is a United Nations International Children’s Emergency Fund (UNICEF) initiative, the #RedDotChallenge to create awareness about menstrual hygiene and bust myths about periods. Furthermore, the objective of the challenge is to inspire people to talk about menstruation to encourage safe menstrual hygiene practices.

One can participate in the challenge by posting a photograph of themselves with a red dot on their palms and tagging UNICEF and mentioning the red dot challenge. Throughout the micro-blogging site, men, women, young girls and even boys could be seen participating in the challenge.

Boys and girls came together to raise awareness about the importance of menstrual hygiene, “Lets roar out periods, why be shy?” they questioned in the pictures.

This little girl decided to be a part of conversation too, “menstruation matters,” she said.

Men also joined in to join the challenge. “Here I accepted the #RedDotChallenge. A Challenge to bring a positive mind-set about Menstruation. Let’s talk about it and break the taboos because menstrual hygiene matters,” tweeted one of the men.

#WorldMenstrualHygieneDay
Here I accepted the #RedDotChallenge A Challenge to bring a positive mindset about Menstruation. Let's talk about it and break the taboos because Menstrual hygiene matter. #MenstruationMatters #unicef pic.twitter.com/G5MygUOsVc

The theme for Menstrual Hygiene Day 2019 is #ItsTimeForAction that calls for educating and informing boys and girls about safe menstrual hygiene management.

Over 10,000 Kg Of Garbage Collected From Mount Everest