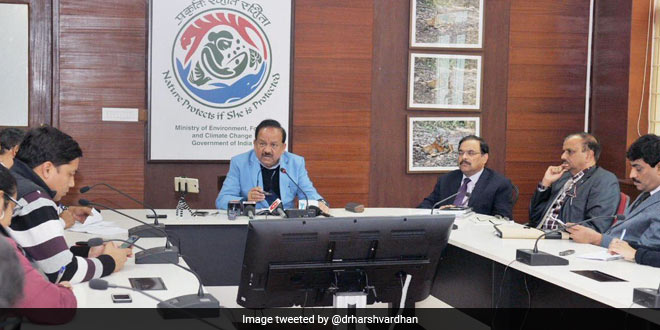 New Delhi: A fortnight ago, Union Minister for Transport Nitin Gadkari had promised to reduce air pollution in Delhi-NCR by 50 per cent by April 2018. Going a step further, Minister for Environment Dr Harsh Vardhan on February 13 said that the Ministry of Environment was hoping to bring down air pollution by 50 per cent in 100 cities where air quality was severely poor. The mission, a part of the National Clean Air Programme (NCAP) will take place over the course of the next five years, said the Minister at a press conference scheduled to discuss Budget 2018’s environmental allocations.

One of the first steps to be taken by the Ministry of Environment to air quality nationally will be the plantation of 1,000 crore saplings between 2021 and 2030 at several places along the river Ganga. This plan has been formulated to ensure that air quality of severely polluted cities like Kanpur and Allahabad improves. In the next three years, the Ministry will focus on 100 cities to expand air quality monitoring network, conduct studies which measure the health impact of air pollution, set up air information systems and conduct bigger awareness campaigns. Dr Harsh Vardhan said that the Ministry was hopeful of bringing down air pollution by 35 per cent by the next three years and by 50 per cent by the next five years.

As a part of the National Clean Air Programme, the Ministry of Environment will also collaborate with relevant central ministries and state governments to improve air quality in some of the country’s most polluted cities. As a part of the programme, the 15-day long Clean Air For Delhi campaign was launched by Dr Harsh Vardhan on February 10. Lessons learnt from the campaign will be implemented in other cities facing air pollution. The programme was launched jointly by the Ministry of Environment and Government of Delhi, and marked the first instance of the Centre and state coming together to tackle the air pollution which worsened in Delhi since the onset of winter. Within the first three days of the campaign, joint teams comprising officers from the Central and Delhi government issued 310 challans for air quality violations, tweeted Dr Harsh Vardhan.

The onset of winter in 2017 was marked by severe air pollution across Delhi-NCR and several major north Indian cities such as Kanpur, Allahabad, Ghaziabad and Gurugram. Emissions from vehicles, stubble burning in Punjab and Haryana and dust from debris are some of the major causes why air quality remains perpetually poor across major north Indian cities. Air pollution found a considerable mention in the Union Budget 2018 speech, where Finance Minister Arun Jaitley promised of providing financial assistance to the governments of Punjab and Haryana to tackle stubble burning.

Since Budget 2018, air pollution is being taken seriously by the Centre and respective state governments. Improving air quality is a long-term goal and short term results should not be expected. It is good to see that the government is setting long term goals, spread over the next few years to tackle air pollution. Government efforts must be spread throughout the year to improve air quality, said Anumita Roy Chowdhury from Centre for Science and Environment.

If Each One Of Us Will Just Keep One Square Foot Area Clean, Our Country Will Become Truly Swachh: Sachin Tendulkar