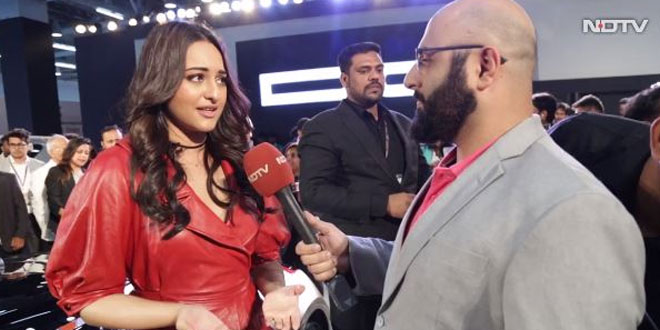 “It’s the need of the hour. I think everyone should switch to electric cars,”

That was actor Sonakshi Sinha’s views on electric cars and how important it was to switch to electric cars to cut down vehicular emission. The actor spoke to NDTV at the Auto Expo 2018, an expo showcasing the latest in automobiles, running from February 9 to 14 in Greater Noida. Electric vehicles have been one of the prime focuses in the 2018 edition of the Auto Expo as many car manufacturers as well the Union Government has pushed for switch to electric vehicles and cut down on vehicular emissions which result in air pollution.

The actor said that there was no need to add more to environmental pollution as there was enough of it already. Since there is an alternative available in the form of electric vehicles, it should be explored and used widely, said the actor.

When there is an alternative and we have found it, discovered it, and there are cars that are functioning on it, so why can’t we make all of them electric? asked the actor.

Vehicular emission is a major cause for air pollution in India. With an estimated number of 21 crore vehicles in India, emission levels are across the country have risen considerably in the last three decades. The rising number of vehicles with poor emission standards rose considerably in urban spaces, resulting in a rise in pollution levels. Electric vehicles have been considered as potential solution for the emission problem and the present

Auto Expo 2018 saw a few developments on the e-vehicle front. Bird Group and Swedish electric carmaker Uniti announced to bring an affordable, electric city car to the Indian market by 2020 with a price tag starting from Rs 7.14 lakh. Tyre company Goodyear showcased its ‘BHO3’ concept tyre which can charge the battery of electric vehicles as the car moves. Tata Motors also displayed a range of electric vehicles at the expo, as a range of its present popular cars such as Tiago and Tigor have now been electrified. Mahindra showcased four electric vehicles at the expo, namely the e-KUV100, the Udo and Atom last-mile CEVs, and the new e2O NXT.

A shift to electric vehicles by 2030 can cut India’s carbon emissions by 37 per cent, said a Union government report in May 2017.

Goa To Construct 70,000 Toilets In Villages Within Wildlife Sanctuaries